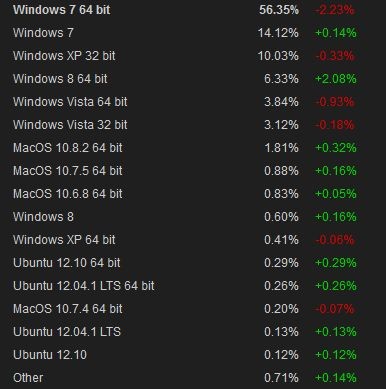 Last month, Valve's monthly hardware survey of its Steam users for November 2012 showed that the percentage of its Windows 8 owners had already overtaken Steam's Mac users. This week, Valve updated its hardware survey for the month of December 2012 and once again showed Windows 8 gaining among its hardcore PC audience.

It's also clear that the vast majority of Windows 8 users, at least those using Steam, have installed the 64-bit SKU. Just 0.60 percent of Steam users are using the 32-bit version. Windows 8 64-bit users are now the fourth biggest group of Steam users when broken down by individual SKUs.

This is the first month on Steam's hardware survey that we have seen stats for Linux Ubuntu users, which are currently participating in an open beta test. As you might expect, the total number of Ubuntu users on Steam is still quite small. The combined total percentage stands at 0.80 percent.

Windows 7 users of Steam are now 70.47 percent of all Steam owners, down from 72.56 percent from the month before. Windows XP is still being used by 10.44 percent of Steam owners and the combined number of Mac Steam owners is currently at 3.72 percent.