Vivaldi Technologies boss, Jon von Tetzchner, has announced the availability of Vivaldi 2.7. The new update brings a host of usability improvements including the ability to mute tabs before the sound even starts, quicker profile switching, an option to enable Flash, a more informative Status Bar, and improved stability on macOS.

Vivaldi is by far the most advanced web browser on the market, especially since Opera became Chromium-based several years ago. With Vivaldi 2.7, the list of features only continues to grow, one change is the ability to mute tabs before audio or video even begin playing. This feature has been heavily requested by the Vivaldi community and now its users won’t be unnecessarily irritated or surprised by unwanted audio. 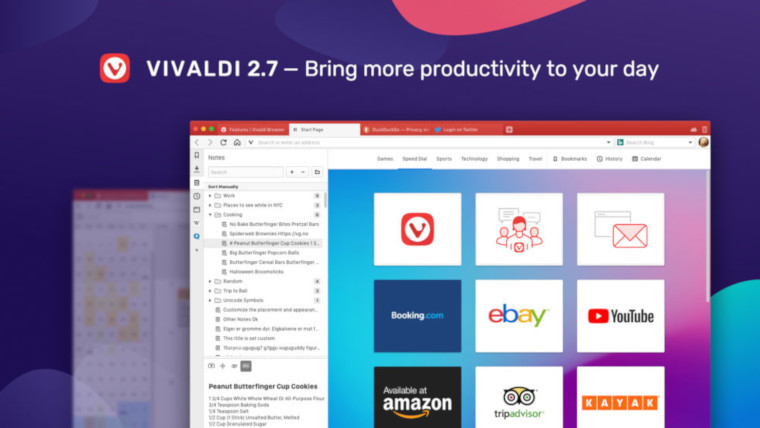 The new muting feature joins a list of comprehensive tab muting options that include ‘Play All Audio’, ‘Play Online In Active Tab’, and ‘Prioritize Active Tab’. With Vivaldi 2.7, you can also ‘Mute other Tabs’ by clicking on any background tab in the Tabs Bar or Window Panel, with only your active tab playing sound.

Vivaldi 2.7 also brings improvements to user profiles. With this update, you can create desktop shortcuts for a specific profile making it quicker to access. A checkbox to create a desktop shortcut can be found in the user profile menu. Unfortunately, this feature is only available on Windows for the time being so macOS and Linux users will have to wait.

Other changes in this release include optional Flash support for websites that require it; the plug-in can be enabled under Settings > Webpages > Plugins. The Status Bar has been made more informative too - it now tells you what’s happening in terms of the page loading. Some status messages it shows include “Processing request”, “Waiting for”, “Connecting”, and “Establishing secure connection”. The last major improvement is macOS stability improvements. Stability on macOS was noted as a “long-standing issue” so now could be a good time to check in on Vivaldi again if you use the operating system.