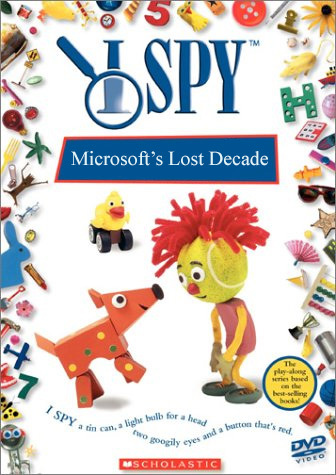 There has been a lot of conversation the past few weeks about "Microsoft's lost decade" and it really is a baffling thought when you actually take a look at Microsoft's history. The tagline, if you want to call it that, first made its debut over at Vanity Fair with quite a few damning quotes against the company and how it stifled innovation.  We were not there, we don't have our own quotes from an insider who wants to go on record and burn bridges or repair them, so we must take the article at face value.

The gist of that article did have one point that it hammered home, bureaucracy. Having never worked for Microsoft, I can't attest to their internal culture 10 years ago, what I can attest to is the fact that every single large corporation on planet Earth has a metric-ton of red tape (large being defined as top 50 Fortune 500 company) as I have been inside a handful of those companies. Get over it, that's how corporate America works, there is a reason "middle management' exists, they are the red tape. If we didn't have these barriers, every staff level employee would have a direct line of communication to the CEO and most companies would lose focus. It's the way corporations work, why this is surprising to some that Microsoft fell into this bucket, I can't figure that one out.

Also, Microsoft's employee rankings were bashed, but we all know how this goes. I have never met an individual who has loved how their company ranks their employees; each corporation has their own method and considering Microsoft has billions in the bank, 90K plus people working for them, and they have a dozen, yes a dozen, billion dollar companies under their umbrella, I think they might know what they are doing.

Moving on, another story popped up, which was the spur of this rebuttal-style editorial, that struck Microsoft down again. This time, TechCrunch cherry picked Microsoft's history to highlight the company's shortcomings over the last 10 years. To draw a comparison, let's judge Apple by the success of P!NG or the Hi-Fi or base Google's future off of Buzz and Wave, both are an absurd measuring stick.

Microsoft is far from perfect and Ballmer has had his fair share of struggles over ten years but you know what else also happened during those ten years, or "lost decade" revenue tripled, profits went through the roof and Microsoft gave back so much cash to shareholders they would need several boats to deliver it all.

In fact, Microsoft did strike back at this nonsense and it was none other than Frank Shaw that brought back the reality of Microsoft's success. His quote is posted below, in full, from the TechCrunch article:

The comment above could have been a post on it's own as Microsoft's Frank Shaw finally had enough of the noise that has been circling of late about Microsoft. The most ludicrous part about of this is that now is quite possibly the most exciting time to be following Microsoft.

Let's take a look at what Microsoft has coming over the next 12 months: Windows 8, Windows Phone 8, Office, Surface Tablet, a new Xbox announcement is likely, and a few other gems like Halo 4 are locked away in Microsoft's upcoming portfolio to drive revenue. Regardless of what you think of Windows 8 and Windows Phone, it shows that Microsoft has balls and that they are willing to defy marketplace norms to make an impact. If we all sat around and waited for the start button/orb to evolve, Microsoft would have slowly faded as they fell behind; so they did something about it.

What they are doing with Windows 8 is driving the future. If you think Windows 8 is an OS for yesterday, you are missing the picture. Windows 8 is the platform to build tablet/laptop hybrids that move us in the direction away from the "PC" as we know it without losing all the hardcore functionality that we need. Throw Windows 8 on a tablet, it works, it works pretty damn well actually. But I am not following Microsoft blindly, I know that it will be a hard sell. What you have to understand is that Microsoft has to establish a foundation for the future and we all know that Windows 7 is not going anywhere which gives Microsoft a window of opportunity. Microsoft has to make the move to transform Windows to be more touch friendly and now is that time; it's really not that hard to figure this out.

Besides taking time to write this article and proving that we too can photoshop children's novels, Microsoft did not "lose a decade". Microsoft had better than an okay decade, they had a tremendously positive decade. Maybe now we can put to bed that bashing Microsoft is still cool or should we all go back posting our Apple rumors to whore out the hits? Oh and by the way? Apple runs on Microsoft software.