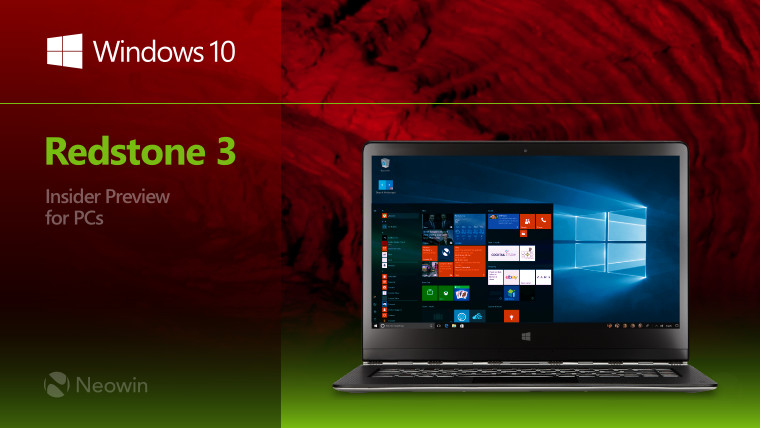 A new Windows 10 for PCs build is available in the Fast ring today, which is build 16179. It follows 16176, which was made available five days ago.

The build is from the Development Branch, meaning that it's a preview of Redstone 3 (RS3), the next feature update to Windows 10. This is the third Insider Preview of the update, and like the previous two, it doesn't contain much in the way of features; instead, the main focus is on improvements to OneCore.

There are a couple new features though:

Revert VM: Continuing our theme of simplifying Hyper-V for developers on Windows 10 (see What’s New), we’re introducing automatic checkpoints so that you’ll always be able to undo a mistake in your virtual machine – you can now always revert to the last time you started a virtual machine.

Introducing Power Throttling*: You may remember some of the power experiments we did back in January with Build 15002. Power Throttling was one of those experiments, and showed to have up to 11% savings in CPU power consumption for some of the most strenuous use cases. So, we’re turning this on for everyone starting with last week’s build. Check out our complete blog post on this for more details!

You can find out about the fixes and known issues in build 16179 here.

While we probably won't see anything really exciting from RS3 builds until Microsoft's Build 2017 developer conference, we're expecting it to be a significant update to the OS. Arriving later this year, it should contain a new design language called Project NEON, a new 'Cshell' which scales the UI across PC, phone, and other Windows 10 platforms, and much more.

Windows 10 for PCs build 16179 comes alongside Windows 10 Mobile build 15205; however, the Mobile build isn't exactly Redstone 3, but something called 'feature2', which we'll likely find out more about soon.