In 2012, the two man development team of brothers Patrick and Daniel Klug formed Greenheart Games and launched Game Dev Tycoon for Windows 8. The game puts the player in charge of a game development studio in the 1980s as they try to grow a successful business. In January, the developers posted word on their blog that Game Dev Tycoon had over 6,000 free trial downloads and that 2,300 of those downloads turned into full game purchases.

However, Windows 8 is still installed on just a few percent of all PCs worldwide. This week, Greenheart Games released a desktop version of Game Dev Tycoon for older versions of Windows, along with Mac and Linux versions, to increase its player base. As it turns out, they also released a unique version of the game via a torrent file sharing site. It looks like a "cracked" edition of the full game, which normally costs $7.99 but in fact, this version has a different gameplay setting that won't let players make money for their fictional game studio because their games keep getting pirated. 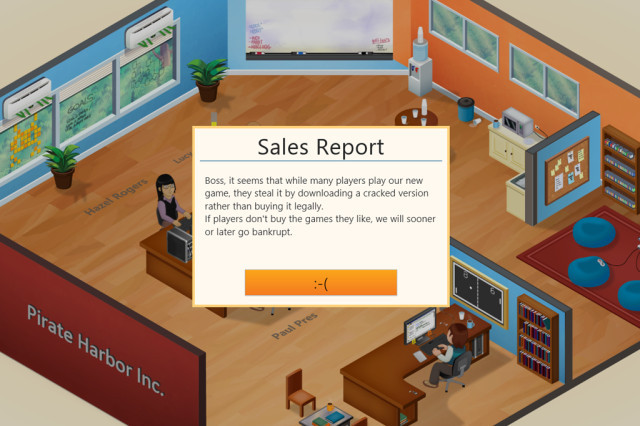 It was an interesting approach to commenting on how software pirates can truly affect game developers, especially small independent studios like Greenheart Games. The result was a ton of media stories about the game as well as an unexpected side effect; the Windows 8 version of Game Dev Tycoon has taken a huge jump in downloads. It is currently the number two paid app in the Windows Store.

Neowin contacted Greenheart Games co-founder Patrick Klug to find out more about the game, the reaction to the "cracked" version and more:

You first released Game Dev Tycoon on Windows 8. Why did you pick that platform first?

How did the idea come about for releasing a "cracked" version of the game for its Windows/Mac/Linux versions?

It came from a simple question on how we should deal with piracy. We knew we didn't want DRM on our game so protecting it wasn't an option. We quickly came up with the idea to release a cracked version ourselves as then, at least, we could control the experience of those users. The idea of showing the players what piracy does to companies came a bit later but once we realized the potential to make pirates realize what they are doing, we were keen on implementing it.

What's the response been like from software pirates? Have they decided to go ahead and buy the full version after playing the cracked version?

Yes, many have! We got many emails saying that they had pirated it and heard about our story and then bought the game from us. It's great to see the support but I really hope that this does change their general attitude as well. Game developers simply need the financial support of gamers. I truly believe that the reason the gaming industry has a trend toward free-to-play, social or always-on games is piracy. I think everyone is aware that piracy does some form of financial damage but the much larger issue is that piracy actually changes what games are produced.

As I've said in my blog post, if years later you can't find any games that you truly enjoy anymore, then it's only your own fault for not supporting the devs who made them. I also think that Kickstarter projects become more popular because of piracy as well. After all, you can't pirate something that doesn't exist yet so to get users excited early in a project seems to pay off more nowadays. I'm not sure if this is always a good thing.

Since the "cracked" version was released, Game Dev Tycoon has shot up to the number two slot on the paid Windows 8 app on the Windows Store. How do you feel about that, especially since the game has been out for that platform for several months now?

We are, of course, overjoyed by the sudden rise in players and popularity and we are looking forward to bringing you more games in the future. The increase in players will also allow us to polish, balance and improve Game Dev Tycoon a bit more as well.

Do you think this incident will make people think twice about pirating a game from now on?

From the general comments on blogs it did seem to have some impact but sadly most people who use pirated software are hard to convince. I really hope that the industry can approach this topic with more arguments then the simple 'it costs us money'. If players would realize what their support could do to gaming in general everyone would be much happier.

Finally, what do the two of you have in mind for the future of Greenheart Games?

We had a couple of very different concepts almost ready to go but now it will be a little while before we can focus on something new but you can expect to hear from Greenheart Games again and we will stick to our motto 'less social, less ville, more gameplay'.

We would like to thank Patrick for answering our questions.