Microsoft today showed off Office 15 on ARM, revealed Zune is here to stay (for now) and revealed more details of what's going to be in the consumer preview. They also briefly showed that Google's services work with Windows 8. 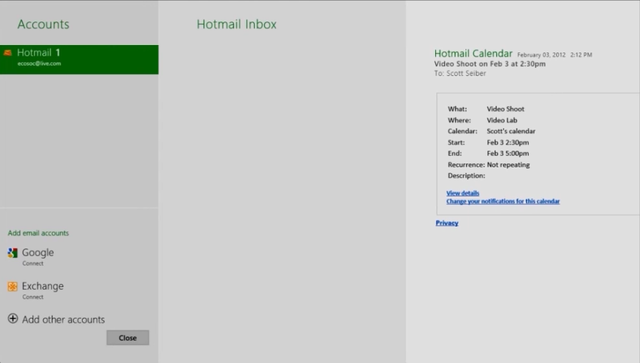 Just like on Windows Phone, adding a new account gives you the opportunity to set up your Gmail account and pull in mail and calendar appointments from there. It's great to see that Microsoft is adding in these services by default, rather than just ignoring them and integrating Hotmail/Exchange by default.

No more detail was given, but we know you'll be able to add multiple Gmail accounts, subscribe to multiple calendars from one account and that there will be threaded email messaging.

Windows 8 will be available later this month to the public in the form of a Consumer Preview on February 29. For more coverage, follow the Windows 8 tag.