Yesterday, at its Worldwide Partner Conference (WPC), Microsoft released the beta version of the Windows Phone 7 developer tools which include an updated and much faster phone emulator. Today Microsoft has shared some information about its “web companion” to Windows Phone 7, Windows Phone Live, plus a few other interesting pieces of information.

The emulator allows developers to test out their code in the Windows Phone 7 environment, but it has many of the default applications and settings removed from the operating system, only allowing people access to Internet Explorer, Search and a few options.

Despite being aimed at developers, a lot has been learnt by non-developers about Windows Phone 7 thanks to the masterminds at XDA Developers who, very shortly after the emulator was released, were able to expose the true power of the OS. Long Zheng then promptly recorded the below video going through each area of the mobile OS looking at how it functions and feels; suffice to say he seems impressed with it. I especially like how it will be possible to control media playback easily across the OS.

Not covered in the above video is the Voice Control feature of Windows Phone 7 which is accessed from holding the Windows button. There are three command types on offer in this version; Call, Find and Open, each allowing a user to ring someone, search using Bing or open an app. It will be interesting to see if this feature gets any media playback commands like Kinect for Xbox 360. 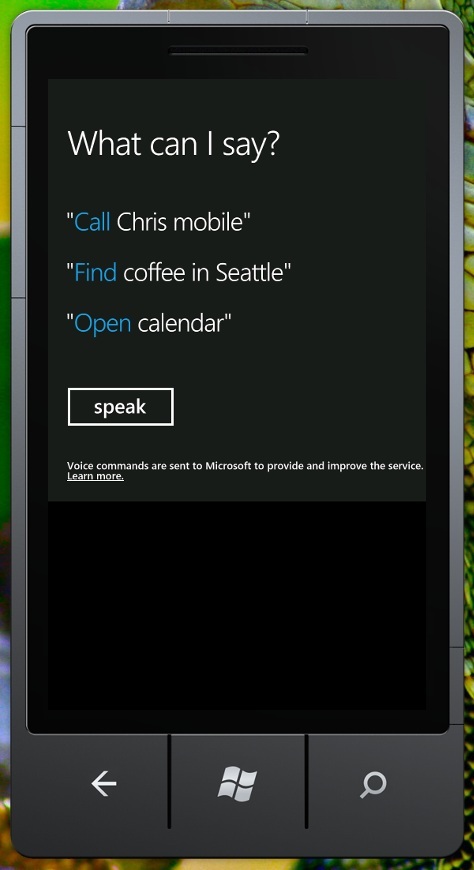 A few things to note from this new emulator are that there is a lot of small additions and polish throughout. For example, there are now 10 colours choices for the accent colour throughout the OS; the accent colours are the links within the OS and the Live Tiles on the Start Page. Another notable addition is the numerous default ringtones and alarms which again Long has a video of. These small new features seem to indicate that Windows Phone 7 is very close to being finalised.

Also announced is that the engineering devices would soon be shipping out to developers, you can read more about it on Neowin here.

Today at WPC Microsoft mentioned Windows Phone Live, a new service to act as a “companion” to Windows Phone 7 devices, accessed through the web. In a blog post on the Windows Blog the company supplied some information about what this new service will be able to do; it sounds like a cross between Live Mesh and My Phone.

Live Mesh, the syncing software from Microsoft, had a short lived mobile version for Windows Mobile devices. With the folding of Live Mesh into Windows Live Sync, it would appear that this technology will be an inbuilt feature of Windows Phone 7. My Phone is Microsoft's web companion for Windows Mobile which backs up much of the content on a user’s phone and gives the user the option for locating, ringing and erasing data on a lost phone.

This new service from Microsoft is said to give “people a central place to see pictures they’ve published, view their Windows Live calendar and contacts, exchange OneNote files and access other information shared between the phone and the Web”. Neowin understands this new feature will allow instant uploading of photos to a user’s SkyDrive account (whether this is the special area of SkyDrive for Sync folders or the whole 25GB of storage is currently unclear) and the photos can be shared to other places on the internet from this new service or SkyDrive. Another aspect of this web companion will be to allow “people to find and manage a missing phone with map, ring, lock and erase capabilities right from [their] PC”. The functionality of this new service does sound like a combination of Live Mesh (or Windows Live Sync) and My Phone which further shows how keen Microsoft is to integrate as many of their services into Windows Phone 7 as possible. The most important part of this new service is that everything is absolutely free – free, as in free beer!

Windows Phone Live is currently online but requires a Windows Phone 7 device to be associated with a user’s Windows Live ID to explore the service so is not yet usable.

Microsoft have also announced that they are still on track to release Windows Phone 7 in time for the Christmas holidays; all signs and tea-leaf readings still point to an October launch for this OS. Furthermore, the company discussed the supported languages of the OS at launch and locations that the full Windows Phone Marketplace experience will occur. The initial languages of the OS will be English, French, Italian, German and Spanish and the full Windows Phone Marketplace experience will be available in Australia, Austria, Belgium, Canada, France, Germany, Hong Kong, India, Ireland, Italy, Mexico, New Zealand, Singapore, Spain, Switzerland, UK and United States.

Microsoft will have a few more announcements to make over the summer with at least one centred around games, where Microsoft will announce one of the centrepiece games for Windows Phone 7; there have been rumours of a Halo title for the mobile devices.