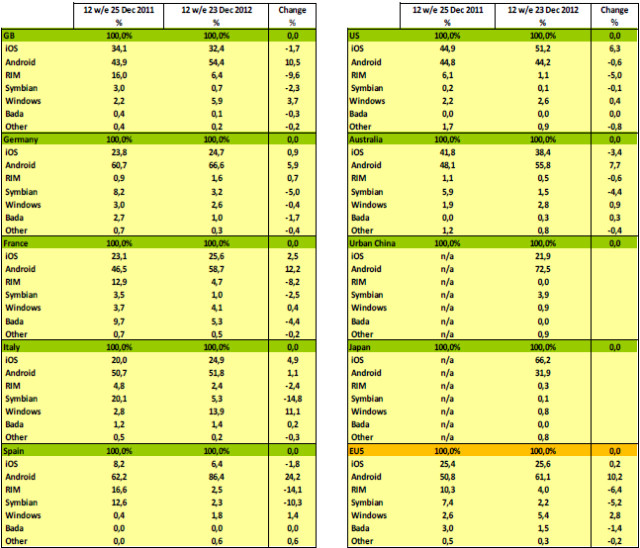 At the end of last year we presented some info from Kantar Worldpanel ComTech that proved the Windows Phone platform was slowly but surely increasing in market share. The data from back then, though positive, did not include the sales of Windows Phone 8 devices during the holiday quarter which led us to expect even better numbers to come.

It seems that we were right, and Kantar has just published new info on the global smartphone market. This info indicates that Windows Phone 8 has had a strong impact on the Windows Phone platform and that Microsoft’s mobile operating system is finally getting some significant traction.

The best news comes from Europe where Windows Phone’s marketshare has more than doubled, with 5.4% compared with 2.6% back in 2011. Leading the pack is Italy where adoption has surged and Microsoft’s OS now accounts for a very healthy 13.9% of the market. Great news also comes out of Britain with 5.9%, up from 2.2% at the end of 2011. This is significant as the UK is one of Europe’s major markets and Windows Phone had previously been lagging there. However, this big increase tells Microsoft and its partners that they are finally doing something right.

Unfortunately Microsoft and Windows Phone are still not seeing significant gains in the US and China, the biggest and arguably most important markets out there. In the States, Windows Phone has seen only a very modest increase of 0.4% year over year which means Microsoft only controls 2.6% of the market.

“It has been far slower than Microsoft would have liked, but Windows Phone is now starting to gain respectable shares in a number of key European countries. However, its performance in the Chinese and US markets remains underwhelming. As the two largest smartphone markets in the world, these remain key challenges for Microsoft to overcome during 2013.”

Talking about smartphone manufacturers, Sunnebo points out that Samsung still holds the number one spot but that in Britain, Nokia seems to be making a comeback, selling 6.2% of all UK smartphones - a 50% increase year over year. Also in Britain, which used to be a very lucrative market for RIM, Blackberry is really starting to feel the heat as Microsoft has almost gained on them with their 5.9% marketshare compared to RIM’s 6.4%.

It is very clear from these numbers that Microsoft and its partners are gathering momentum and while it’s slow, their market share and consumer interest are rising. China and the US remain problematic markets and we will probably see even more effort in that direction during 2013. But despite this progress, Windows Phone remains far behind its iOS and Android rivals.