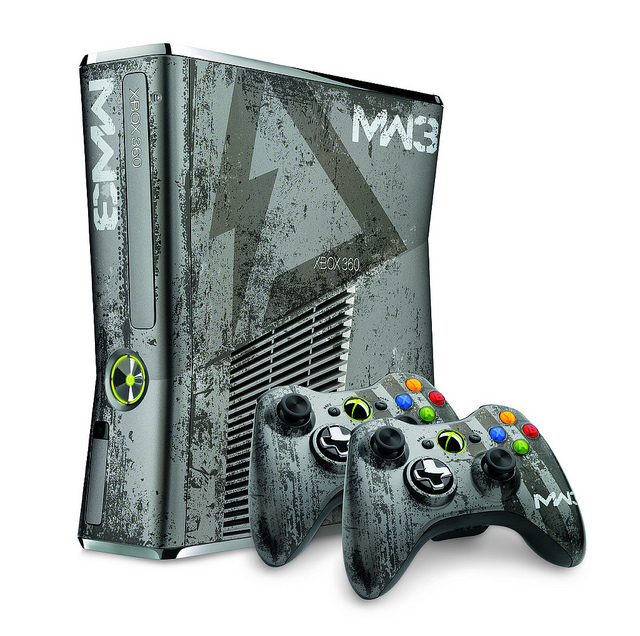 Microsoft treats the Call of Duty first person shooter series almost like it was a first party game franchise for the company. It's no secret that Call of Duty titles have sold the most on Microsoft's Xbox 360 console. The game's publisher Activision also releases the game's DLC packs for the Xbox 360 platform first. Today, Microsoft announced via the Major Nelson web site that it will release a limited edition version of the Xbox 360 that will have custom graphics from the next game in the series, Call of Duty Modern Warfare 3.

The limited edition console will also come with two wireless Xbox 360 controllers, both with Modern Warfare 3 graphics, and a copy of the game itself from developers Infinity Ward and Sledgehammer Games. Inside the console, gamers will find a roomy and exclusive 320 GB hard drive and a custom sound package for the console's on/off button and the disk tray eject. It also comes with one free month of Xbox Live Gold service and some exclusive items for your Xbox Live Avatar. Pre-orders for the limited edition console are now being taken for $399 at retailers and it will be released on November 8, the day that Modern Warfare 3 ships to stores.

In addition to the special Modern Warfare 3 Xbox 360 console, Microsoft will sell two other custom hardware devices on October 11. One is a version of the Xbox 360 Wireless Headset with Bluetooth that will have Modern Warfare 3 graphics. It will be priced at $69.99. The other is a version of the Xbox 360 Wireless Controller, again with the game's custom graphics, for $59.99. Both devices will have an Xbox Live code that can be used to get an unnamed exclusive downloadable item.