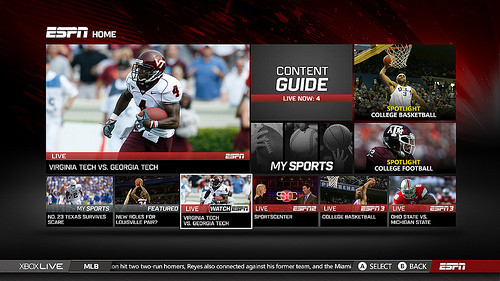 Microsoft continues to push through updates for its Xbox 360 hardware that make it much more than a gaming console. Today, the company announced a major new update for the ESPN app that adds a ton of live streaming programming options.

Before today's update, the ESPN Xbox 360 app was only able to stream certain amounts of live programming, but could not offer live streams of regular shows, such as the popular SportsCenter news roundup. That's all changed today.  The Major Nelson website states:

The app now includes all of ESPN’s live network programming through WatchESPN including ESPN, ESPN2, ESPN3, ESPNU, Buzzer Beater and Goal Line. Xbox LIVE Gold subscribers can watch all their favorite sports and shows live, including SportsCenter, SportsNation and the Mike and Mike Show, as well as ESPN’s coverage of the NFL, including Monday Night Football, MLB and the NBA.

The website also posted word that the ESPN app will also include new support for Xbox SmartGlass sometime later in December. Xbox SmartGlass is an app for Windows 8, Windows Phone 8, iOS and Android devices that offers up a "second screen" of additional content for some Xbox 360 games and features. More details on the ESPN Xbox SmartGlass features will be revealed later.