Yahoo said on Tuesday that it has begun testing organic (also referred to as algorithmic) and paid search listings from Microsoft for up to 25 percent of Yahoo Search traffic in the U.S.

The testing will allow for Microsoft's Bing search engine to be the exclusive algorithmic search and paid search platform for Yahoo sites. Microsoft and Yahoo signed a 10 year agreement in June 2009. Once complete, Bing will hold nearly 30% market share of U.S. web searches, according to data from comScore.

Yahoo has started testing its search results page with data coming from Microsoft's platform. Sponsored results and search listings are now powered by Bing and Yahoo says it anticipates that the U.S. and Canadian organic search listings in both desktop and mobile experiences will be fully powered by the Microsoft platform beginning in the August/September timeframe, and paid search in October. "Transitioning complex systems with quality requires a lot of testing, and we’re in the process of doing just that," said a Yahoo spokesperson.

Both Yahoo and Bing have showed steady growth in the past few months as Google's dominance slowly dips. Microsoft and Yahoo were both up in market share in the U.S. last month whilst Google dropped from 63.7% to 62.6% (ComScore). 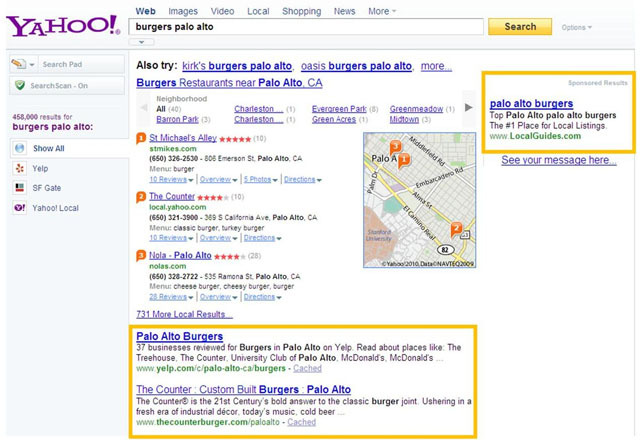