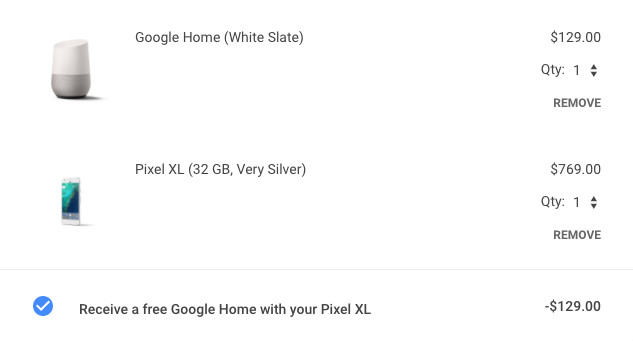 It has been several months since Google announced its Pixel and Pixel XL handsets, but despite the time that has passed, it still remains an alluring handset with its excellent camera and constant updates to the latest version of Android. Now, the firm has a new promotion for those that purchase the Pixel XL that will see them get a free Google Home.

While the Pixel and Pixel XL has the older Qualcomm Snapdragon 821 processor, its camera is still one of the best available. The company is rumored to be working on a follow-up that will offer an improved design and could be one of the first to have the unannounced and unconfirmed Snapdragon 836. Samsung might also offer the processor with its upcoming Galaxy Note8.

If you live in the United States and feel eager to pick up the Pixel XL, be sure to head to the Google Store. While the Home should be added to cart automatically, if not, be sure to add it manually. If all goes right, you should see the price of $129 subtracted from the total price.