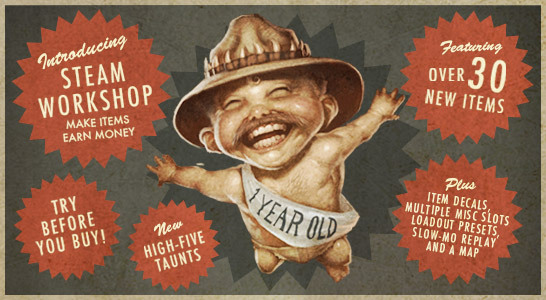 A year ago today, Valve announced that its multiplayer shooter game Team Fortress 2 was adding an in-game store. The Mann Co Store sold new weapons, items and virtual clothes for Team Fortress 2's various character classes. Valve also opened up the store to allow Team Fortress 2 players to create and sell their own in-game items with Valve's approval. Today Valve revealed that the amount of profit generated by the sales of those in-game items has amounted to $2 million. That money has been given to those community creators in the first year of the Mann Co Store.

Valve's Gabe Newell said in a press release, "By leveraging and extending the platform features of Steam, Team Fortress 2 has enabled a viable marketplace for independent content creators and significantly extended the gameplay experience in an incredibly short amount of time."

In order to celebrate the launch of the Mann Co Store, Valve has also launched the first version of the Steam Workshop. This is an improved submissions feature for all those Team Fortress 2 items created by third parties. In addition to getting feedback from Valve team members, members of the Team Fortress community will be able to comment and rate the in-game items that are submitted to the Steam Workshop.

The Steam Workshop is part of Team Fortress 2's "Manniversary Update". It adds 30 new hats and items to the game, along with a new item decal system. Nearly all of the items are on sale in the store from now until Monday and Valve also is letting players try out items and weapons for free for six days. Details about the Manniversary Update can be found at the Team Fortress 2 web site.