Activision announced that the popular Skylanders franchise has arrived on the iPhone, iPad and the iPod touch. Skylanders Cloud Patrol is set in a brand new area of the Skylands that have been overrun by the evil minions of the Portal Master, Kaos.

The game itself differs drastically from the well received and high selling Skylanders Spyro’s Adventure released last year across nearly all of the home consoles and on the 3DS. You will take control of a sky-ship and use the Skylander of your choice to take out enemies via touch-based gestures.

As with all Skylanders games, you have the option to unlock the 30-plus skylander characters to play in the game by using the code that comes with each of the Skylander action figures that you can buy in stores. 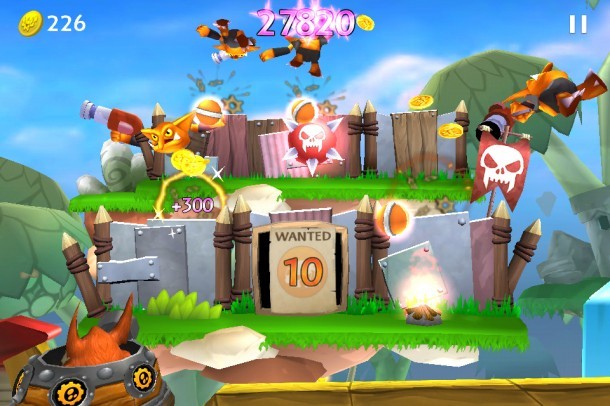 John Coyne, Activision’s Vice President, Consumer Marketing said “Skylanders is already a huge success both on consoles and the web with Skylanders Spyro’s Adventure and Skylanders Spyro’s Universe and we are excited to bring the franchise to the mobile platform,”.

He went on to say, “Now with Cloud Patrol, fans have a brand new way to interact with their favorite Skylanders’ characters on the go and in a new fun form of gameplay.”

Skylanders Cloud Patrol also allows players to earn or purchase in-game currency which then lets they build up a “virtual mobile Skylanders collection, Magical Items and more”. The game also features Apple’s Game Center leaderboards, achievements and a 3D viewer that lets gamers check out all of their in-game items in full detail.

You can download the game on the iTunes App Store now for 69p/$.99