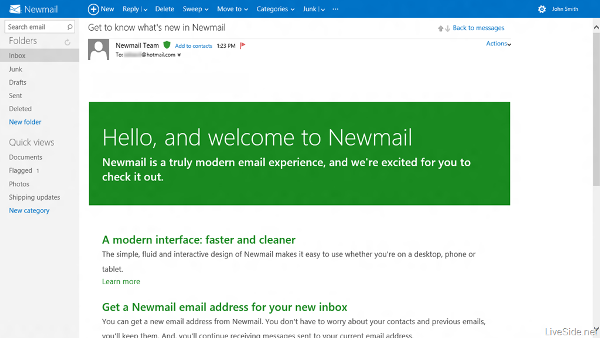 New screenshots of the upcoming Hotmail redesign indicate the service may be getting a name change as well. The screenshots, released earlier today, contain additional information about upcoming changes to Microsoft's mail service, such as a new domain for e-mail addresses from the service.

LiveSide posted a number of leaked screenshots of the mail service's new, Metro design – this time in English – including an automated e-mail from “Newmail” that implies the service will be rebranded. The message indicates the naming change will include a new domain for e-mail addresses that old Hotmail accounts could be converted to.

It’s unlikely that “Newmail” is actually the name of the service; instead, the Newmail name is likely a temporary name before Microsoft reveals the service's official rebranding.

Screenshots of the Microsoft's e-mail service began appearing yesterday, featuring the a Metro design consistent with Microsoft's Windows 8 design. The rebranding of Hotmail also comes shortly after the company announced it would be rebranding its Zune music service to Xbox Music.

Source: LiveSide | Image via LiveSide | Thanks to Possession in the forums for the tip!