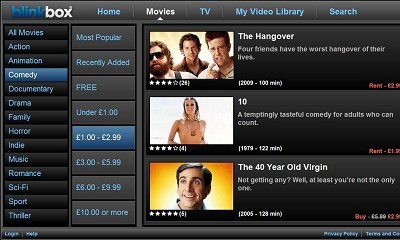 Blinkbox, an online movie and TV streaming service, will soon begin streaming their content to the PS3. According to the Blinkbox site, they are the leading online movie and TV website in the UK and they have partnered with "pretty much every major studio to bring you a huge selection of movies, TV and  also a load of movie trailers. "

Blinkbox CEO, Michael Comish told the Associated Press, "The PS3 is the first of a number of devices to which we will be bringing Blinkbox, enabling customers to use our service on their TVs for instant streaming of new blockbuster movies - available on the same day as their release on DVD - as well as a growing library of free ad-supported titles." This suggests that the Xbox 360 and the Wii could be next but with Microsoft already offering movies and TV shows on Xbox Live, they may not be able to partner with Blinkbox.

Prices on Blinkbox start at 39p ($0.58) for TV shows and films starting at 99p($1.48). It is also possible to get films on a 'keep forever' basis starting at £2.99($4.46). This service will be a direct competitor to the Netflix streaming service that became available on the PS3 in November.

Michael Comish ended his announcement saying, "As a console owner myself, I knew that fellow gamers wanted access to the very largest selection of movies for instant viewing, and did not want to lose valuable hard-drive space or have to wait for their downloads. Blinkbox brings the movie and gaming worlds together, now we just need someone to make a good movie of a game!"