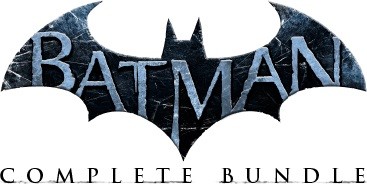 Since the recent revival of the Batman franchise at the box office, there have been a slew of games riding on the coattails of its success. So far, three of the four games have been released in the Batman Arkham series starting with Batman: Arkham Asylum in 2009 followed by Arkham City in 2011 and most recently with Arkham Origins in 2013.

The fourth and final release in the series, Batman: Arkham Knight, is due for release around the middle of next year for PlayStation 4, Xbox One and PC.

In the meantime, if you've not gotten into the Batman: Arkham series or have only picked up one of the installments, then you may be interested in a sale that will snare you a great deal. Advertised as the Batman Complete Bundle on Bundle Stars, it includes:

It's worth noting that the "Game of the Year" editions already include all of the downloadable content for their respective titles.

In terms of price, for the next three days, you can grab the Batman Complete Bundle to add to your Steam library for just $9.99 instead nearly $85 when bought separately on Steam. Given the great bang for buck, this could be a worthwhile virtual stocking stuffer for gaming friends and family which won't drain your bank account.

The low price could also be enough to sway those thinking of pirating the series; particularly after a deliberate glitch was left in Arkham Asylum which rendered Batman's wings useless in cracked copies of the game.