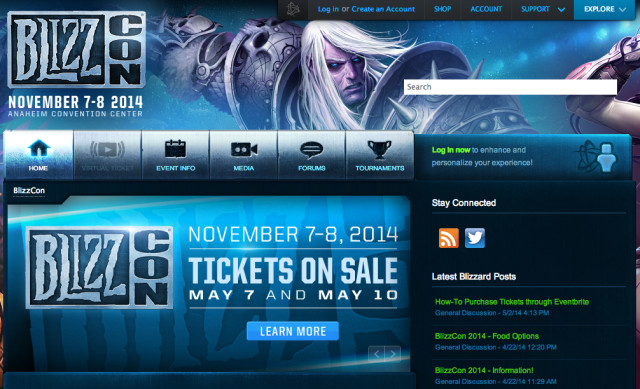 Blizzard has announced plans to hold its eighth BlizzCon convention that will take place on November 7 and 8th, 2014. The popular gaming convention will be held at the Anaheim Convention Center, celebrating all things Blizzard and showcase current and upcoming titles.

Most recently, Blizzard Entertainment launched With Hearthstone and the Diablo 3 expansion, Reaper of Souls. BlizzCon will also showcase two betas, Heroes of the Storm and Warlords of Draenor, which should see a release sometime in 2014.

Following BlizzCon tradition, attendees will also receive a goody bag with commemorative items and limited edition products. In the past, BlizzCon has hosted a closing ceremony that included performances from special musical guests. While this years BlizzCon guests have not yet been announced, previous years have included: Video Games Live, Ozzy Osbourne, Tenacious D, Foo Fighters, and Blink - 182.

BlizzCon tickets can be purchased through the BlizzCon Eventbrite website. The tickets will go on sale in two batches, one on May 7th at 7pm PST and the other on May 10th at 10am PST.  Tickets will be priced at $199 USD.