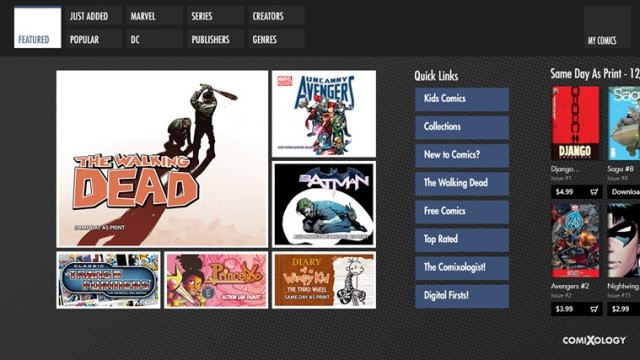 In July, ComiXology became one of the first major app companies to jump on the Windows 8 bandwagon when it launched its app in the Windows Store during the Release Preview version of Microsoft's OS. This week, ComiXology released a new and major update to the Windows 8/RT app that includes a total redesign of its interface.

Previously, the design of the app was pretty bare bones, allowing ComiXology users to download and read digital comics but not to purchase them from inside the app itself. The new version finally allows users to browse through the over 10,000 comic book issues and buy them in the app.

The new interface allows users to also browse through comics by publisher, story arcs, their free comics section and more. Their library includes both classic and new issues from publishers like DC, Marvel, Image, Dynamite, Boom Studios, IDW and many others.

We are still waiting for the one lone major comic book publisher that doesn't sell digital comics from ComiXology to join Windows 8. That would be Dark Horse Comics, which has its own mobile app solution for iOS and Android devices but has yet to announce any plans for a Windows 8 app.