As we mentioned on Wednesday, Microsoft was not all that clear on whether the upcoming Outlook 2013 RT app would be confined to the Windows RT desktop, or if it had been designed as a newer Modern UI app. Microsoft added to the confusion when whomever was in charge of the official Surface Twitter account posted word that it would be "a Windows Store app, not desktop."

Well, we can now safely put this issue to rest. A Microsoft spokesperson called Neowin to tell us that Outlook 2013 RT will indeed run on the desktop. That means the @Surface tweet was incorrect - or perhaps just carelessly worded; despite not being a Modern UI app, Outlook RT is still expected to be distributed via the Windows Store as part of the overall Windows 8.1 update. 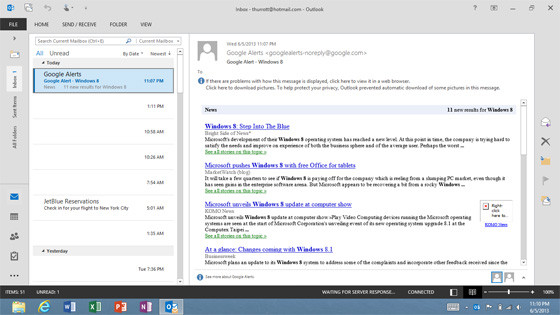 Paul Thurrott of Winsupersite managed to get his hands on an early version of Outlook 2013 RT on his own Surface RT tablet, and the screenshots reveal its desktop interface. This is consistent with most of Microsoft's other Office 2013 programs which, while optimized for touchscreens, have maintained the same basic desktop UI in their transition to Windows RT.

Thurrott says Windows RT device owners will be able to download the first public version of Outlook 2013 RT when the free preview version of the Windows 8.1 upgrade is released on June 26th, with a final version due by the end of the year.