WP7 not only launched today in the United States, but Canada also is launching the new platform today too. But, unlike the US which so far is reporting minimal supply shortages, Canada is a different story.

Twitter reports that users are having trouble finding any WP7 devices in the great white north and that devices may not be in stock for some time. One user reports that his local Rogers is claming a two week wait time until they get any (read they never had any of the devices) of the Samsung Focus in stock. Another user reports that he called several Bell stores who acknowledged that the platform has launched but they have no devices in stock. 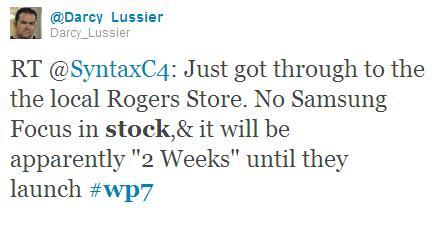 It seems as if Microsoft and its US carriers may have gotten priority on stock supplies. As the platform continues to create more buzz now that it's launched, Microsoft needs its vendors to get as many products into the stores as possible.  If Microsoft cant show solid sales during Q4, it could be a massive blow to the company and Steve Ballmer, who recently just sold off a boat load of his Microsoft stock.