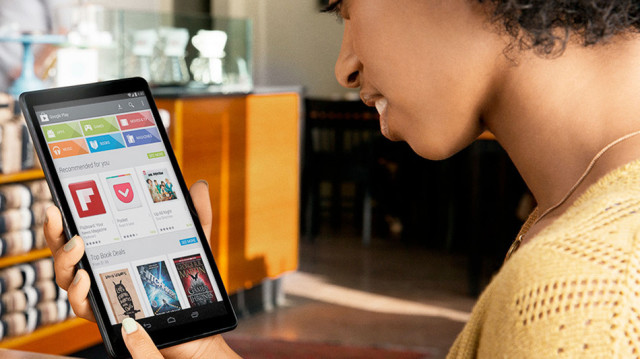 Google has updated the promotional website for Android 4.4 KitKat, and the "Apps and Entertainment" page may have inadvertently revealed an unannounced Nexus tablet running on the updated operating system.

The image, which was first discovered by a forum member of The Verge, shows the tablet in the hands of a model. The appearance of this tablet is slightly different from the current Nexus 7 model, as it looks thinner and has a smaller bezel while having a marginally bigger screen. The front-facing camera is also notably absent in the render. No other information is available at the moment, but sources believe that it could be made by LG, which currently make the Nexus 4 and Nexus 5 smartphones for Google. LG recently submitted an 8-inch tablet called V510 for Bluetooth certification, which could be a variant of the G-Pad tablet.

Google is no stranger to accidental leaks of their devices as the Nexus 5 made a brief appearance in a company promo and Eric Schmidt was photographed with a Moto X earlier in the year, making the Nexus 8's existence a possibility. The image was previously spotted here and has now been replaced with that of a Nexus 7. It's also possible the image was simply a generic, unbranded tablet rendering.

Source: The Verge via Mashable | Image via Google