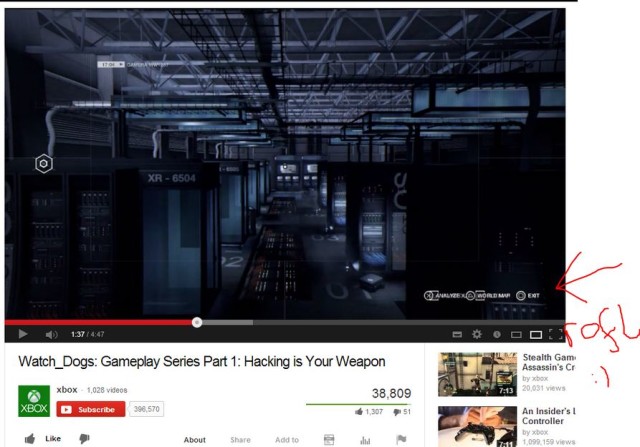 With the launch of not one but two next-gen game consoles due out in 15 days, you have to expect that certain mistakes will happen when it comes to the promotion and marketing of these products. One of them may have happened to Microsoft on a recent YouTube upload of gameplay from "Watch_Dogs", the upcoming open world action game from Ubisoft that is coming for both the Xbox One and Sony's PlayStation 4 consoles.

As this Reddit threat shows, a brief moment of gameplay footage shown on the Xbox YouTube channel seems to indicate it was taken from a PS4 build, as the distinctive buttons from Sony's controllers can be seen in the lower right hand corner. Microsoft allegedly tried to edit the footage after it went live to remove the buttons but now the video has been removed completely from the YouTube channel.

It's more than likely that Ubisoft provided the same "Watch_Dogs" footage to both Sony and Microsoft for promotional purposes and didn't see the PS4 controller buttons, and that Microsoft also didn't see them before they uploaded the video to their YouTube account.  When you are dealing with developers who are making games for both systems, things like this are bound to happen. Still, it's a reminder that the graphical looks for both the Xbox One and PS4 versions are pretty close to the human eye.

Thanks to DixieNormus for the tip!