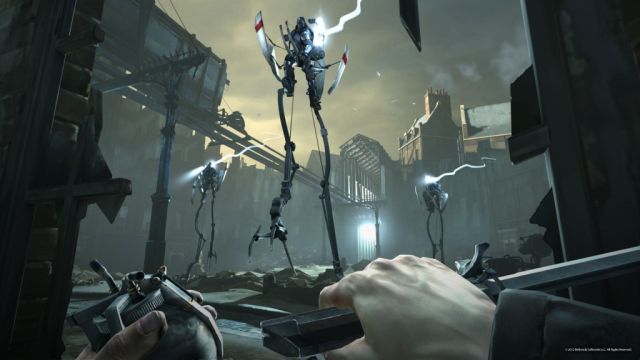 An upcoming game with an unusual setting now has a firm release date. Publisher Bethesda Softworks announced earlier this week that Dishonored, from developer Arkane Studios, will be released for the PC, Xbox 360 and PS3 platforms on October 9th in the US. Europe gets the game a few days later on October 12th.

We got a chance to see a hands-off demo of Dishonored last August at QuakeCon 2011. The setting for the game is on another world which will have a kind of Victorian steampunk art style. The player controls a man named Corvo, once a legendary guard for this world's leader, the Empress. In the game, Corvo is now on the run after being framed for The Empress' murder.

Our QuakeCon 2011 demo showed Corvo going through the city of Dunwall to complete a mission. In addition to conventional weapons, our hero also has some some supernatural abilities such as taking over the minds of living creatures or freezing time.

We still don't know a lot about the game's storyline at this point, but Dishonored's mix of first person action and stealth combined with its very different setting should make the game stand out from the crowd. It helps that another game that could have taken some of Dishonored's thunder away, Bioshock Infinite, has been delayed from October 2012 to a release in late February 2013.