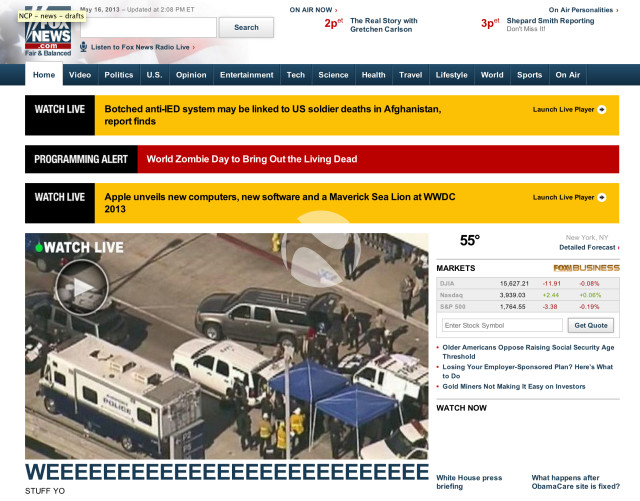 Earlier today, a story on the front page of Foxnews.com made it appear that the site had been compromised. While the page was up for some time with the headline story being ‘WEEEEEEEEEE’ with the subtitle of ‘Stuff Yo’, Fox states that it was an internal publishing issue and that the site was not compromised.

As you may have seen, https://t.co/m6O9czWONs is having issues. It's an internal production problem and will be fixed soon. #FoxNews

While it is good that the site was not hacked (even though that would be a more acceptable reasoning) it is highly embarrassing when these sort of things happen as it represents a breakdown of controls at Foxnews.

Publishing errors do happen (we here at Neowin have had our fair share) and on the backend, they are never fun to deal with. What is odd about goof up at Foxnews is how long the filler articles remained on the front page before being yanked.

To make it clear, it was first reported that the site might have been hacked but that is not the case. The site published a bunch of content that was likely filler for testing to the live site.