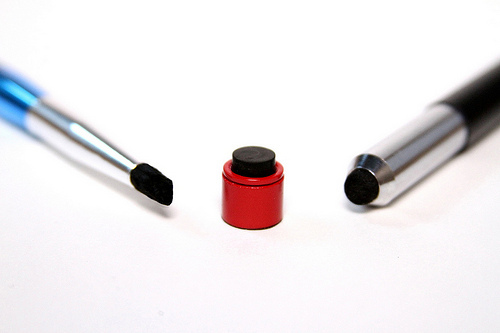 One of the major drawbacks to gaming on a touch screen device like the iPhone or Xoom is the lack of tactile response while playing. Sure, you can tap the screen but there’s no physical response to let you know that the button press was successful. Now a couple of men from Chicago are trying to solve that problem by starting a Kickstarter campaign to create a device called “The Classic,” a small button that sticks to the screen of your device to give you that tactile feedback. The buttons use “micro-suction cup tape” that keeps the device attached to the screen but can still be removed easily with no residue and the springs in the buttons have been custom designed for this project.

For those who are unaware, Kickstarter is a site that attempts to unite people with creative ideas with people who wish to fund those ideas. Requests are vetted out by the maintainers of Kickstarter and the ones that have potential are posted to the site to try and raise money for the project. Each project has a goal amount to reach and contributors are only charged if that goal is reached. Funds are then transferred to the creator using Amazon’s payment system.

In addition to the buttons, the project is attempting to create two other input devices. One, called “The Flow,” is a paintbrush device that can be used with conductive screens to paint with. The video shows the designer using an iPad and painting hair and a mustache onto a baby’s face. The second device, called “The Scribe” is a stylus and claims to have, “the smallest tip we've ever seen on a capacitive touch stylus and it glides smoothly across the screen.”