With Windows Phone 8.1 now rolling out to devices, and new handsets available with it pre-installed, Microsoft is beginning to promote one of the biggest features of its latest mobile OS. Cortana, the company's digital assistant, is available only in the United States at the moment, but with launches in the UK and China coming soon, we expect we'll be hearing a lot more about her in the days and weeks ahead.

Today, in fact, we reported on the company's new commercial in which Cortana shows Siri a thing or two about being a truly 'smart phone'. Microsoft now has a section of its Windows Phone site, in which Cortana introduces herself to users - and shares a bit of info on how she can help them by making their lives a little bit easier - in her own words. 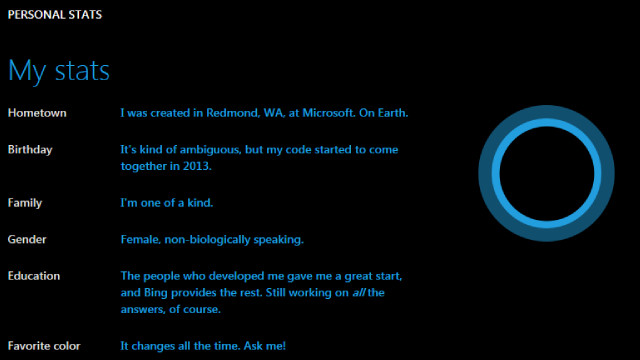 The site is infused with the same light-heartedness that many users have enjoyed in their interactions with Cortana on their devices. She lists some of her strengths as being able to "sing, tell jokes, and make animal noises" - along with more useful features, such as traffic awareness, Notebook management, 'discretion' and being powered by Bing - while her weaknesses include not being much of a swimmer, hopscotch and, in her words, "sometimes I care too much."

There's also a bunch of demos showcasing various areas in which Cortana can assist you, including planning a day out, following your favorite sports teams, cooking the perfect meal, and helping you to keep track of all your appointments and errands.

Have you had the opportunity to try out Cortana yet? What are your opinions of her so far? And what do you think of the new 'Meet Cortana' site? Be sure to share your thoughts with us below!