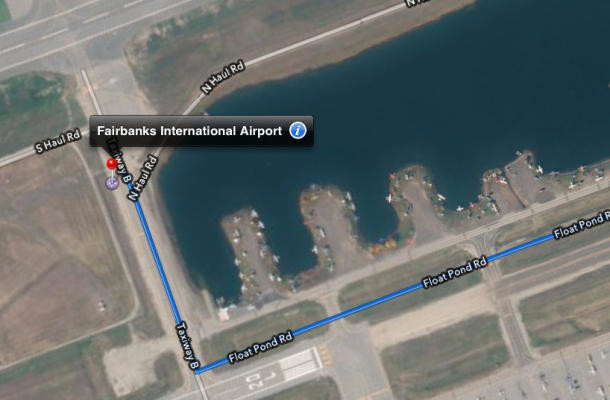 The glitch is still present in the latest version.

Yet another glitch in the Apple Maps software is directing wayward drivers onto a runway at a major Alaska Airport instead of the intended destination, which in this case is the terminal building an airport official said on Wednesday.

Although so far the glitch has only "claimed" two drivers, one on Sep. 6 and again last Friday, thankfully there have been no injuries or major incidents; both occurred in the early morning hours between flights. The directions actually stop at the tarmac, but an airport official pointed out "It doesn't actually tell you to cross, but the problem is, people see the terminal then at that point, because they are right there, and they just continue across," said Fairbanks International Airport spokeswoman Angie Spear.

"Obviously, it could have been a very, very, very dangerous situation had they come during a flight departure or arrival," Spear said. The road has now been barricaded.

Both times the drivers said they were using an iPhone for directions.

In July, state Rep. Les Gara, D-Anchorage, had a close call of his own when he was trying to make a flight after a meeting. In an unfamiliar part of Fairbanks, Gara decided to use his iPhone map app to take the shortest route to the airport.

Gara said the app took him to some weird places in Fairbanks, and then to the small plane airport near the international airport.

"Eventually, it told me to make a right onto the small plane runway, which in fact was the shortest way to get to the big airport," he said. "I give the iPhone app credit for that."

But he did not heed the directions: "I'm not a big fan of driving on runways."

After the first incident airport personnel immediately contacted Apple, who said they would publish an update. But as of last Friday the app had still not been updated leading to the most recent incident.

Apple has yet to comment on the issue to the Associated Press.