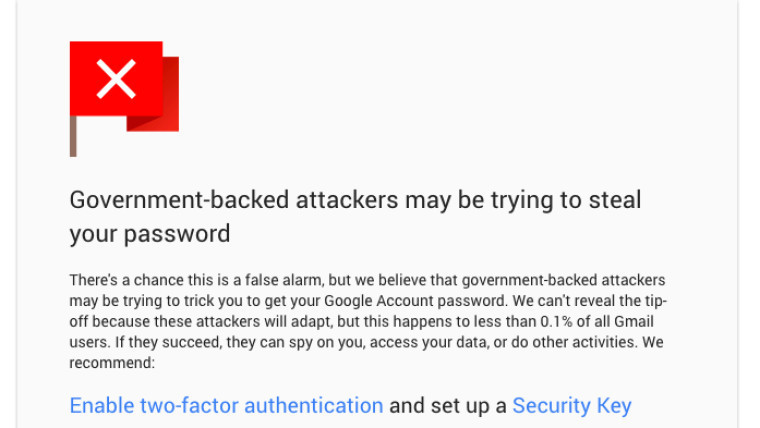 Google is warning some of its high-profile users that their accounts were the possible target of a state-backed attack. Though the warning system has been in place for years, it has flared up over the last 24 hours.

High-profile journalists and writers, like Paul Krugman, columnist for the New York Times, GQ correspondent Keith Olbermann and others, as well as university professors and security researchers were greeted by Google’s red warning banner when they tried accessing their accounts. Some of the warnings read: “Warning: Google may have detected government-backed attackers trying to steal your password”.

Google is also directing users to secure their accounts with strong passwords and two-factor authentication (2FA), though some of the affected users said they already had 2FA turned on.

A Google spokeswoman, cited by Ars Technica, explained that the recent warnings may be over hacking attempts that took place earlier this month. Google doesn’t immediately turn on the warning signal when it detects such attempts, because it doesn’t want to tip off attackers on its detection methods. But that only goes for failed attempts; successful ones reportedly get dealt with immediately.

The warning may be related to a spear-fishing campaign, tied by a security company to the Russian government, that was started soon after Donald Trump won the US presidential election.