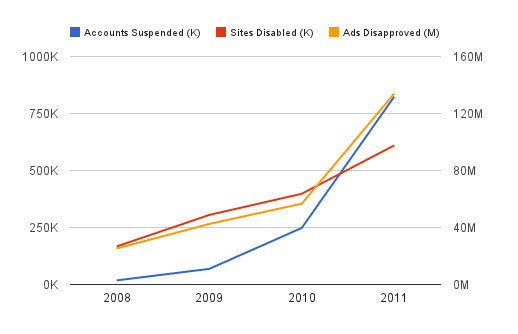 In March, Google revealed its efforts to create automated systems that look for Internet ads that violate its policies. Today, the official Google blog revealed even more information about its fight to get rid of fake or malicious Internet ads.

For many repeat offenders, we ban not just ads but also advertisers who seek to abuse our advertising system to take advantage of people. In the case of ads that are promoting counterfeit goods, we typically ban the advertiser after only one violation.

The blog also revealed the number of ads it has removed from Google in the past few years, along with numbers of the advertiser accounts and sites it has also banned. In 2010, Google rejected 56.7 million ads, but in 2011 that number went way up to 134 million banned ads, an increase of well over 100 percent.

We find that there are relatively few malicious players, who make multiple attempts to bypass our defenses to defraud users. As we get better and faster at catching these advertisers, they redouble their efforts and create more accounts at an even faster rate.

However, Google claims that in the end, its efforts have in fact reduced the number of scam ads that show up on the site, saying that in 2011 it cut down the number of bad ads by over 50 percent compared to 2010.