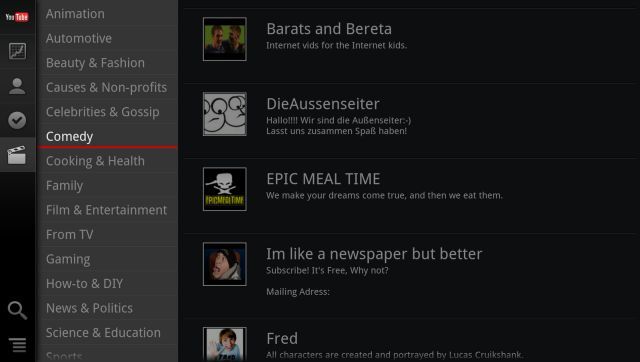 Google apparently doesn't take a weekend off when it comes to revealing new features. On Sunday night Google announced that owners of Google TV devices will receive a new update in the next few days that will offer up some improvements and new additions to Google TV's YouTube feature.

One of the new features can be seen in the above photo. It's called Discover and basically lets Google TV users surf YouTube via different categories of videos. There's also a new channels feature that will allow Google TV owners to quickly subscribe to new channels and navigate through a user's existing channels and playlist.

Yet another new addition will give users a way to see and flip through related videos as well as videos from the same author with the up and down arrows on your Google TV remote. You can also give a YouTube video a thumbs up or comment on it. Finally there are some performance improvements.

So far just a few Sony Bravia TV models have Google TV installed along with the now discontinued Revue set top box from Logitech. In January, Google announced that a number of new hardware partners, including Samsung, Vizio and LG, will release Google TV products in 2012.