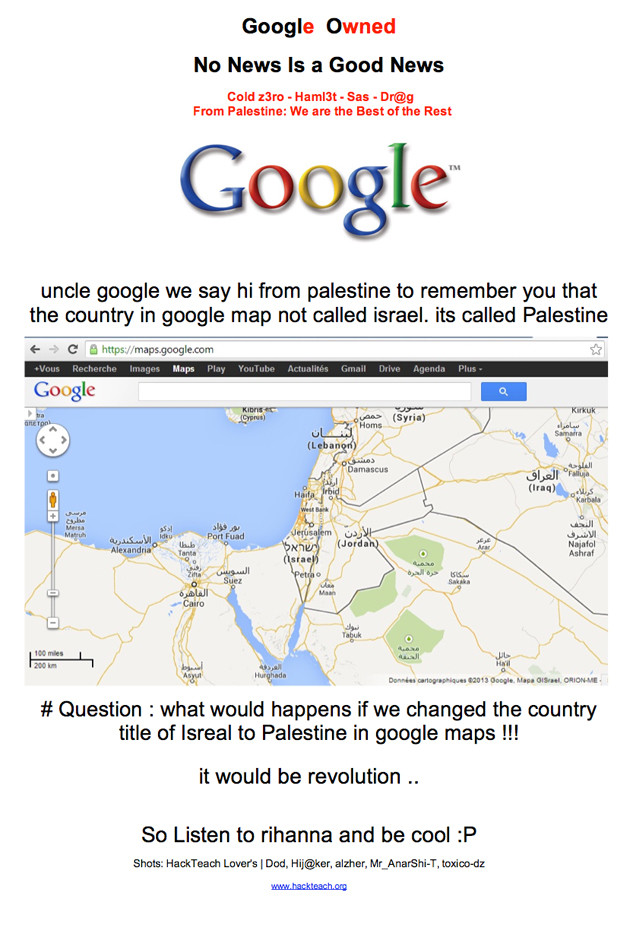 Israel is Palestine, according to a number of individuals responsible for hacking into, and defacing, the Google Palestine domain. Their message calls out for the change to be made, sparking a ‘revolution’.

How Google Palestine’s webpage was defaced is not currently clear, though the leading theory is that Google’s servers weren’t touched, but the domain was redirected to another server, potentially by hacking the domain registrar instead.

Israel’s borders have been a source of controversy since 1948, when the state was formally recognised. Many Palestinians feel they have a right to the disputed territory, with plenty of media focus having been on the ‘Gaza Strip’ in particular.

For fairly obvious reasons, viewing Google Palestine’s defaced webpage is not a good idea. With the site being a Google page, it is likely to receive reasonable amounts of traffic, as the Transparency Report shows. Under these circumstances, malware distribution wouldn't be surprising.

We strongly advise avoiding the webpage, at least for a while until the situation is cleared up. We’re not sure why those responsible recommend listening to Rihanna in their message, but it may have some further significance.

Update: Google has suspended the page altogether now, which redirects here but it could return later.