Back in October, we reported a rumour that Grand Theft Auto V would finally make the jump to PCs in the first quarter of 2014. The game has proven to be a phenomenal success on the Xbox 360 and PlayStation 3, but those with PCs have so far been left out of the fun.

But it looks like the wait may soon be over. As TechRadar reports, Amazon France briefly added a listing for a PC version of the game, which quickly disappeared.

However, over on Amazon Germany, the listing remains active, including the option to pre-order the game. The description mentions compatibility with Windows 7 and Vista but, curiously, does not mention Windows 8. 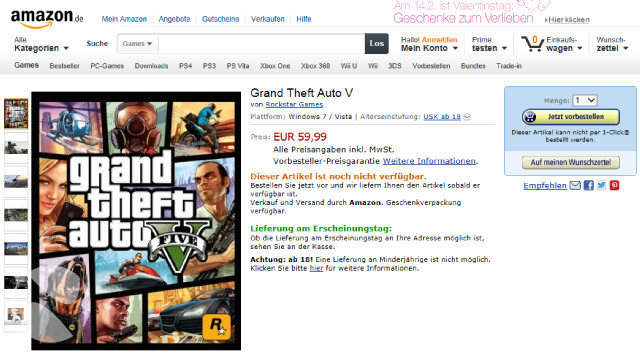 The listing also omits any hint of when those who pre-order the game might expect to take delivery of it.

It is possible that the product page was posted in error on both the French and German sites, of course, but PC gamers eager to get their hands on GTA V will no doubt be hoping that the most expensive video game in history will finally make it on to PCs soon.