Over the last couple of weeks, the Hotmail team has been hard at work upgrading accounts worldwide to the new and improved Windows Live Hotmail; however, some user's emails didn't make the transition and now are left with an empty inbox.

Starting off with one long-term Hotmail user named Andrew Harnaman, or better known on our community forums as Andy2004, has been using Windows Live Hotmail for his personal and business email for a number of years now. Andrew uses multiple email accounts, including a @msn.com, @hotmail.co.uk and @andrewharnaman.com which is hosted using Windows Live Custom Domains.

Andrew's @msn.com and @hotmail.co.uk account upgrades went very smoothly during the recent rollout, transferring over his emails and folders, but when he checked his own custom domain, he noticed that hundreds of emails has suddenly vanished; years worth of information suddenly disappeared without an explanation. When Andrew logged into his account on Tuesday, September 28, he noticed his inbox was completely wiped-out, other than the “Welcome to Hotmail” email everyone gets when you first register a new account.

After digging a little deeper, you can really see that Andrew is not alone, and judging by the 600+ pages of people complaining on Windows Live Solution Center within the last month, including Andrew's post here, you can see this issue is much more widespread than just one individual.

Amongst all of the questions on the support forum, it's clear everyone is getting the same answers and results, their emails have all been deleted and are not recoverable.

One reply to Rajinder Pal Singh, suggests that only deleted messages are recoverable, if you act within 24 hours, but it doesn't appear that anyone will get any of their emails back:

“I've used all my resources but I couldn't retrieve your lost messages. Message recovery does not always have a high rate of success. It is possible that the messages were already purged even before I have tried to recover them.”

Andrew was able to provide detailed information about his account to confirm this story, including screenshots taken from his iPhone, showing that emails did actually exist in his account just days before they were all wiped out. He also confirmed that he does not download his emails to a server, and does not have “delete from server” checked in any of his POP3 clients. You can read Andrew's story here on our community forums. 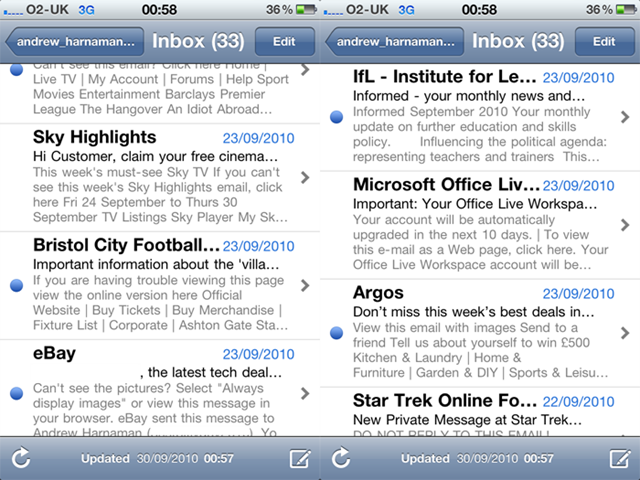 The Windows Live Hotmail team was not available for comment.

Update: A Microsoft spokesperson contacted me about this issue saying this:

We have confirmed that there are no known issues with Hotmail  account migration and data loss. The issue in question is an isolated incident –specific to the particular  user referenced – and we are investigating this situation specifically and sincerely apologize for any convenience this may be causing

Andrew still affirms that this was a fault on Microsoft's end and not an isolated issue. If you or anyone you know has been affected by this issue, please send us an email at andrew.lyle@neowin.net and tell us your story.