Behold, the mighty VantagePoint: a vast interactive touchscreen wall, measuring approximately 11 by 4 feet, that HP hopes will make an impact with its commercial and enterprise customers. Make no mistake – this beast is not designed to sit in your living room. 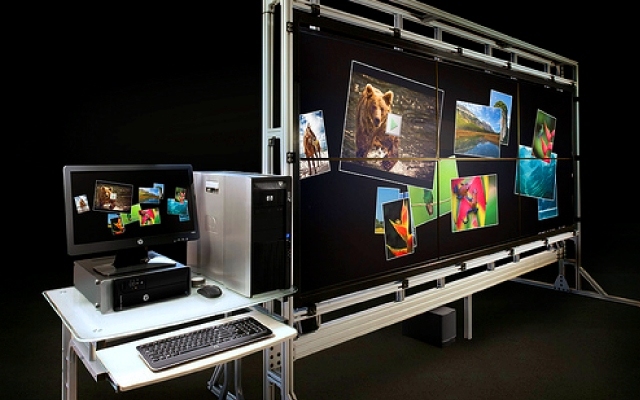 It’s best to describe it as a display ‘wall’, because it’s not actually one giant screen, but six – a cluster of 47” HP LD4730G Micro-Bezel digital signage displays. Each one has 1366x768px resolution; and in their 3x2 configuration, they offer a combined “ultra-high resolution” of 4098x1536px. Together, the wall supports 32 simultaneous touchpoints, and is protected by 2mm-thick Gorilla Glass to prevent those with unusually heavy fingers from breaking it all too easily.

The heavy duty image and video processing for the displays is handled by a HP Z800 workstation, packing dual CPUs and an ATI FirePro graphics card, connected to each panel via Display Port. The less intensive tasks of managing image brightness/contrast and audio controls is delegated to a HP Pavilion Slimline PC.

The company aims to target corporate installations (e.g. headquarters, training offices etc.), high-end showrooms and information zones in consumer hotspots (such as shopping centres and airports). The underlying operating system driving the VantagePoint is Windows 7 Professional, so developers will be able to create proprietary software with relative ease, using the existing APIs and frameworks that already exist for the OS.

That might seem like a considerable chunk of cash – but it would probably be worth it to play Angry Birds on it.