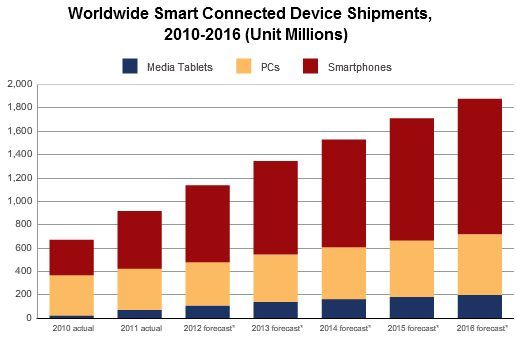 As more and more people purchase smartphones and tablets based on Android and iOS, Windows PCs will lose market share to both of these platforms in the smart connected device industry. That's the conclusion of a new study from IDC, which says that in 2011, the combined sales of PCs, tablets and smartphones totaled $489 billion, with 916 million units shipped worldwide.

PCs that run some version of Microsoft's Windows OS had 35.9 percent of the smart connected market in 2011. However, IDC has predicted that by 2016, only 25.1 percent of those devices shipped to consumers will be based on Windows PCs. By contrast, Google's Android-based devices, which had a 29.4 percent share of the market in 2011, will expand to 31.1 percent in 2016, eclipsing that of Windows PCs.

Devices that run on Apple' iOS platform will also expand from a 14.6 percent share of the market in 2011 to 17.3 percent in 2016, according to the study. By then, the smart connected device marketplace would have expanded to 1.84 billion units shipped worldwide, more than double the number of units shipped in 2011.

The IDC study, however, doesn't mention anything about its predictions for the adoption of Windows 8, which is designed for both PCs and tablets and is currently expected to start shipments later this year. It also doesn't predict what Windows Phone-based devices might do during the same time period.