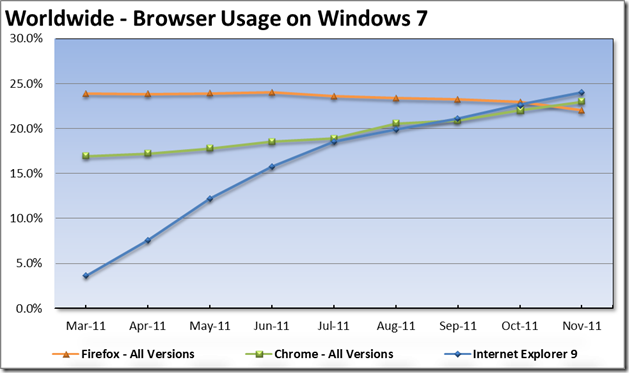 Microsoft continues to promote the use of its Internet Explorer 9 web browser ahead of others. In its newest IE blog post the company showed that with PCs that are running Windows 7, Internet Explorer 9 is now just barely above Google's Chrome and Mozilla's Firefox browser in usage, with IE 9 now being used by just under 25 percent of people with Windows 7 PCs worldwide.

Microsoft says that IE 9 is now just behind IE 8 in Windows 7 web browser usage worldwide. It also announced that in the US, IE 9 should soon be the number one web browser used with Windows 7 PCs. Internent Explorer 9 officially launched for Windows 7 in March 2011.

As with other web browser usage info, Microsoft gets its stats from the NetMarketShare.com web site. The same web site showed that Internet Explorer 8 is still the most used web browser worldwide, regardless of the operating system, with 28.2 percent of the world's browser market share. Chrome is number 2 with 14.58 percent, Internet Explorer 9 is third with 10.25 percent, IE 6 is fourth with 8.03 percent and Firefox is fifth with 7.27 percent.

Microsoft has been promoting the use of IE 9 over older browsers for some time, especially IE 6 which the company says should be dumped by users for both security reasons as well as for better compatibility with web sites that use more advanced HTML5 features.