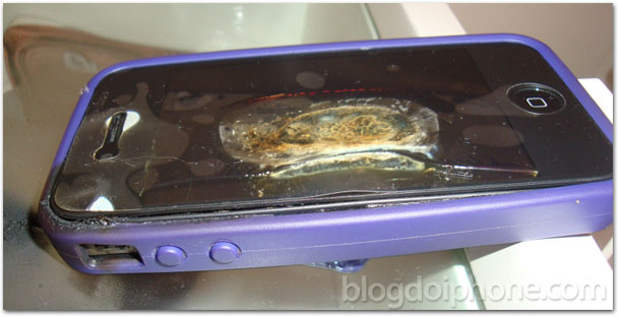 Yet another model of Apple's iPhone 4 device has been reported as having started to smoke on its own. The Brazil-based web site Blogdoiphone.com has reported that Brazil native Ayla Mota was the victim of his iPhone 4 burning up while it sat next to him.

The story claims that Mota was sleeping next to the iPhone 4 which was sitting on a table recharging itself. He claims that he woke up to find that the iPhone 4 had started smoking and sparking next to him. He reportedly pulled the iPhone 4's charger cord out of the socket. He was unhurt by the smoking smartphone but, as you can see in the phone above, he won't be using his iPhone 4 anymore.

This new report was posted around the same time another iPhone reportedly started smoking while its owner was landing in an Australian-based airplane. As with the Brazil incident, no one was hurt. There is also no real indication that these two events are no more than isolated incidents. So if you happen to own an iPhone 4 there should not be any reason to panic that the phone will start smoking out of the blue. As per usual, Apple has yet to comment about these two incidents.