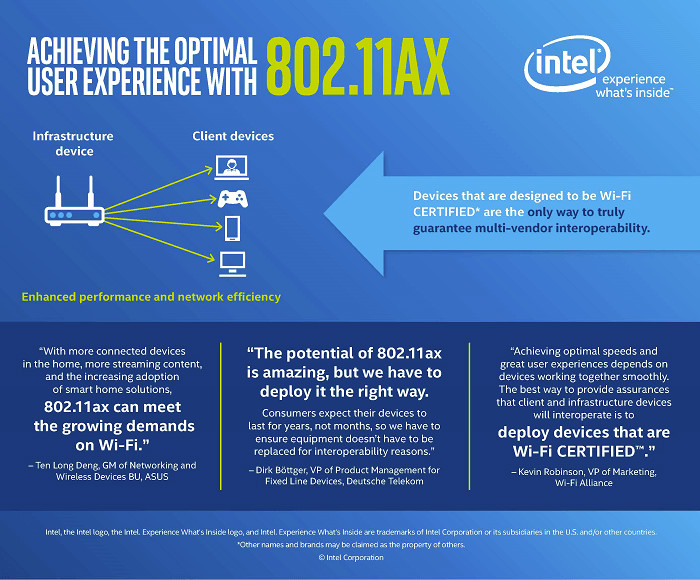 Intel says that in 2018, it will be paving the "path to faster, more intelligent Wi-Fi" with new chipsets for consumer devices, and mainstream 2x2 and 4x4 home routers and gateways for cable, xDSL, and fiber. The company claims that its chipsets will outperform their predecessors operating under the 802.11ac standard by a margin of 40% on a single-client device in terms of peak data rates. It will also increase average throughput per user by four times in congested locations.

Furthermore, Intel's 802.11ax chipsets are based on Draft 2.0 of 802.11ax, which will be the baseline for 802.11ax certification. This essentially means that if infrastructure devices based on Draft 1.0 are networking with Draft 2.0 client devices, they may experience poor performance. However, Intel is also making its own optimizations to the standard for better performance amongst its own 802.11ax devices. In order to offer a smooth transition process for OEMs, Intel has announced that chipsets based on the 802.11ac standard can easily upgrade to 802.11ax without any change to the host SoC. The new standard is also backward compatible to ensure flexibility with older Wi-Fi technologies.

The firm's 802.11ax home chipsets are designed with the always-connected nature of our current lifestyles in mind, allowing up to 256 devices to connect simultaneously. It will also provide enhanced throughput rates, and low latency in gaming, video, and voice calls. Intel has clarified that the standard offers the primary computing engine dedicated bandwidth so it can carry out necessary security functions.