Intel offered up some details about its next version of its Thunderbolt PC data and video port hardware technology in April, but didn't actually get around to giving a name for the update at that time. Today, that changed as Intel revealed the official brand name for the upcoming Thunderbolt upgrade.

And the name is .... wait for it ... Thunderbolt 2! Yes, we know; it's not that exciting of a brand, but the technology itself is pretty cool. The original Thunderbolt port, when it launched in 2011, was capable of bi-directional data transfer speeds of up to 10 Gbps, along with support for video displays. Thunderbolt 2 can handle up to 20 Gbps of data speed, when connected to another Thunderbolt 2 device, while also supporting up to 4K video displays. 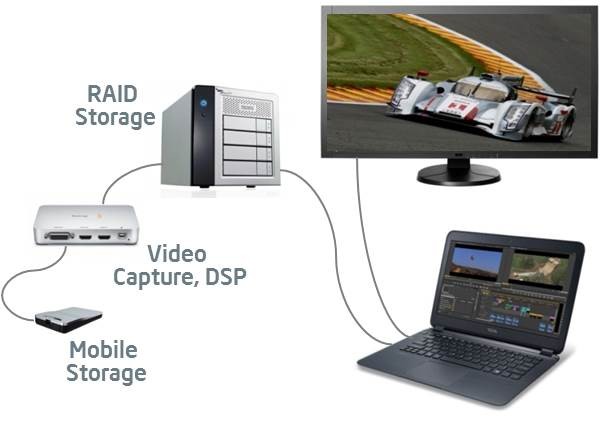 Professionals and enthusiasts alike will be able to create, edit, and view live 4K video streams delivered from a computer to a monitor over a single cable, while backing up the same file on an external drive, or series of drives, simultaneously along the same device daisy-chain.  Backing up terabytes of data will be a question of minutes, not hours.  And finally, since Thunderbolt 2 is backwards compatible, original investments in cables and connectors continue to pay off while supporting dramatically improved performance.

Thunderbolt 2 will officially launch in limited quantities by the end of 2013, with a mass ramp up in 2014.

Intel also gave an update on the adoption of the current Thunderbolt port in PCs. It is now a standard feature in all new Macs from Apple, while the port can also be found in over 30 Windows PCs and motherboards, including over 12 PCs that have Intel's fourth generation Core processor inside. Intel said there now over 80 Thunderbolt PC peripheral products, ranging from hard drives to displays to video capture equipment.