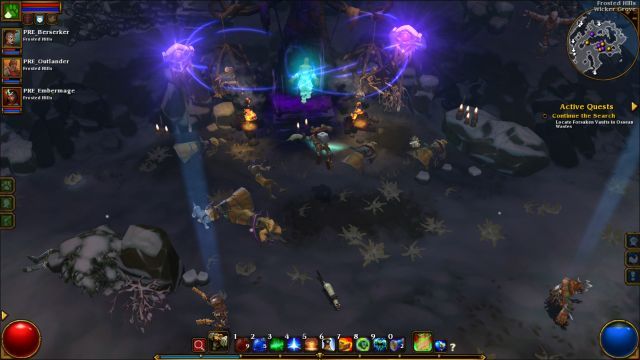 While Blizzard was still working on Diablo III, a bunch of ex-Blizzard team members released Torchlight in late 2009 from their new development studio Runic Games. The fantasy action-RPG became a sleeper hit for the PC and was later ported to the Xbox 360. Now that Blizzard has finally released Diablo III, Runic is also close to releasing its own sequel, Torchlight II, sometime later this year.

We got a chance to ask Runic co-founder and CEO Max Schaefer about Torchlight II, including why the team wanted to create all new player classes for the sequel, their plans after Torchlight II's release and more.

First, how did the multiplayer beta test go for Torchlight and what did the team at Runic learn from the experience?

The beta test went great! We learned a lot, made a ton of fixes, and can now proceed with confidence. Not only did we satisfy ourselves that our network model works, but we got great feedback from the players, resulting in countless tweaks and a substantial skill overhaul. We had hoped that we could run the test quickly and then shut it down because we can't really go about finishing the rest of the content when the beta is running, and fortunately that was the case.

When the team decided to make a sequel to Torchlight, what were the main goals?

Why did Runic decide to go with all new player classes for Torchlight II?

We didn't want to just add multiplayer to Torchlight 1. Besides, in a multiplayer game, you need more customization so people don't all look the same, and it makes sense to go to male and female for all the classes too. So if we're doing all that work, we may as well make new classes.

How has adding multiplayer support for the sequel changed the gameplay, if any, compared to the original?

It affects a lot! Level design, skill design, and particle systems are all important factors affected by multiplayer. Player speeds are adjusted for the new larger areas, and a lot of thought is given to skills that are good for groups. The interface has to be reworked too, for trading, chatting, and other multiplayer features. Of course, there's a lot more that changed under the hood, but that's what you'll notice first.

What other new features were important to put into Torchlight II?

We had to go bigger and better with everything. The world in the first Torchlight was small - just a town and the dungeon underneath, so making a much bigger world with vast outdoor areas was among the most important goals. We want Torchlight II to be player-friendly, so we designed a network system with offline single player, Local Area Network play, and internet multiplayer all available to all characters, all the time.

The game has been available for pre-order for a few weeks. So far what has the response been like?

It's safe to say that our expectations have been exceeded. We've been on Steam's top ten list for several weeks now. People are very excited about Torchlight II.

Can you give us a hint as to the game's final release date?

We still think late summer is a reasonable goal, but as always, we'll keep working on it until it's done.

Are there any plans to release expansions for Torchlight II or perhaps the game's map editor?

We will release our full suite of development tools. Not just map editing, but access to virtually every system in the game, from animations, to quests, to particles, to skills to UI - everything can be modded.

After Torchlight II's release, will Runic Games start once again on its plans for a free-to-play MMO?

We honestly don't know what comes next. We'll do the Mac port, do foreign language translations, fix whatever "error 37" we have, then see what the world looks like and decide what to do.

Finally is there anything else you wish to say about Torchlight II?

Thanks for being patient with us - it will be worth the wait for sure. Oh, did we mention it will be $20 just like the first Torchlight?