As the PC game industry gets ready for the official launch of Windows 8 in just a few months, the people who will be at the front lines of Microsoft's next operating system will be the PC OEM makers. While we have heard some details about what big companies such as Dell, HP, Lenovo, Acer, Asus and Samsung will offer in terms of their Windows 8 products, we also wanted to check in on smaller PC companies that specialize in creating products made for high end gaming and work purposes.

Today we start a series of interviews with these companies and we begin with the founder of one of them that is credited by many to have created the "gaming PC" boutique market: Kelt Reeves, the CEO of Falcon Northwest. It's a company that's well known among hardcore PC gamers thanks to Falcon Northwest's dedication to making some of the most powerful PCs you can buy. Recently, the company launched a new product, a micro-tower desktop called the Tiki.

We got a chance to chat with Reeves about the Tiki, his thoughts on the PC market in general, what he thinks of Windows 8 and lots more. 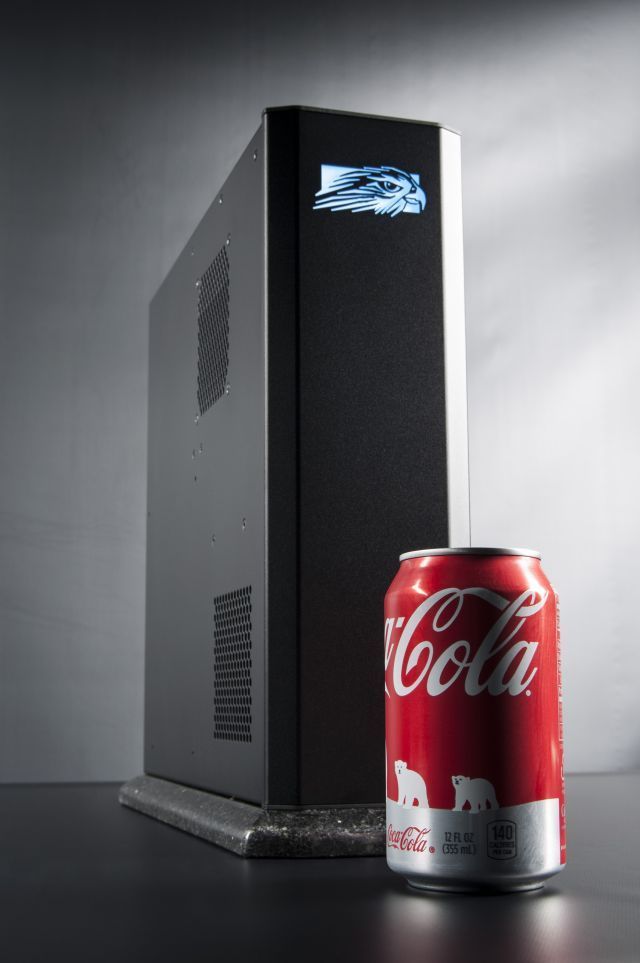 First, Falcon Northwest just launched its new micro tower Tiki PC. How did the idea come about for this new product?

We’ve been attempting to shrink the size of the PC since we released our FragBox Small Form Factor system back in 2003. To us, it’s pretty obvious that while huge, capable full towers are the best option for expansion and cooling, not everyone wants that big a system on (or under) their desks. For Tiki, I wanted to go really small. I wanted to build a system that was the absolute minimum size of what the highest end parts themselves measured. I wanted to set a new standard for power-per-cubic-inch.

How hard was it to put in the kind of high end hardware parts you wanted to have inside the small Tiki case?

It was a pain in the butt, design-wise, to get that much power in that little space and keep it quiet. There were reasons no one had made something that powerful that small before, and we hit all of them smack in the face. We’ve never had to do so many rounds of virtual and physical prototypes on a design before. As you shrink a computer case, unless you use slower components, you’re really just compressing the heat generated by the system into a smaller area. The same amount of wattage gets burned, but now you have less airspace for cooling, less room for fans, and in Tiki’s case, no room even for acoustic dampening material. Additionally, the smaller the case, the more localizable the noise is. In a little box that sits right next to your monitor, it’s very easy to just point at the source of noise and say “that’s where noise is coming from”. So the physical shrink was tough, the “thermal shrink” was tougher, and the “acoustic shrink” was the biggest challenge.

How did you come up with the granite base for the Tiki?

The idea came pretty late in Tiki’s development. We learned from the prototypes (the hard way), that if you make a tower only four inches wide, it’s pretty easy to knock over with a stray elbow. If you have small children or pets, it’s going to happen eventually. We tried some plastic feet designs, but they all needed to add considerable width in order to stabilize the tower. We needed weight, but it had to look nice too. So I went to the granite company that made my kitchen countertops for a “low tech” solution. It takes a half-million dollars worth of computerized stone cutting machinery to carve and polish that low-tech solution, but the end result is both beautiful and functional.

What's been the response so far for the Tiki's release?

The launch press has been extensive, and I never thought the granite base would be the lead story on Tiki. Evidently that blew everyone’s mind, and the granite became the headline of most stories. The in-depth reviews are just now rolling in, but Tiki just became the highest rated desktop on Digital Trends, and it prompted the reviewer to say it’s our “best product”. Of course, what really matters is what Neowin thinks!

Falcon Northwest has been a pioneer in terms of making high end PCs for gaming. Is it harder to keep up with so many other companies claiming to also make high end PCs?

We just passed our 20th anniversary, and I’d like to think we’re still pushing the industry with products like Tiki. We continue to invest in our own unique system designs, while most of our competition seems content with using the same cases anyone can buy at Fry’s and slapping their logo on it. So I’d like to think they’re the ones that are trying to keep up! 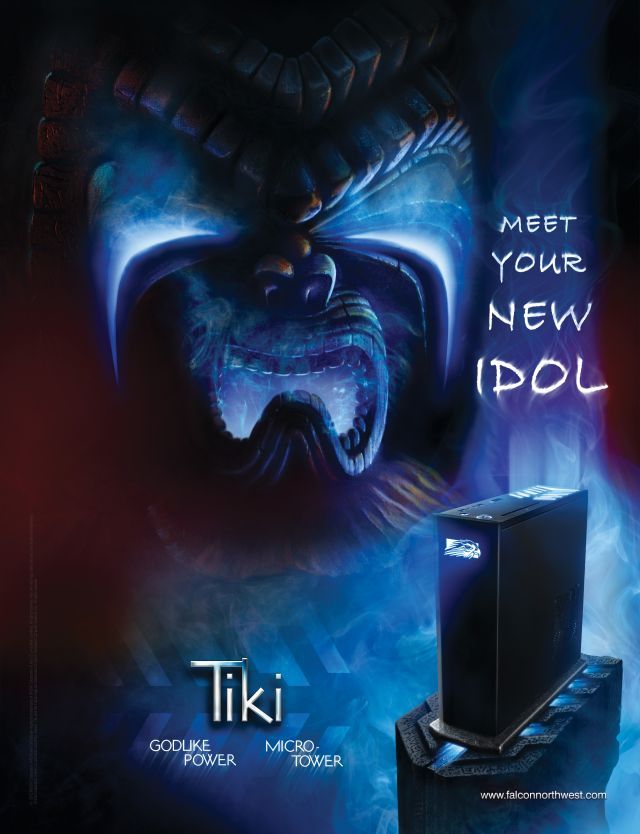 We do miss those great print ads that Falcon Northwest used to have in gaming and PC magazines. Is most of your marketing and advertising now on the Internet?

Print is not (quite) dead! I’ll attach some of the print ads for Tiki here for your readers. There are still great print magazines like PC Gamer and Maximum PC around where these ran. But yes, we spent more on internet than print on Tiki’s launch.

Some people have said they can make their own PCs cheaper and have them be as powerful as those made by companies such as Falcon Northwest. What is your argument to convince those people to purchase one of your desktops or notebooks?

If you know how to build a kit car, you don’t have to buy a car and I’d never try to convince you not to pursue your hobby. But for most people, even some who have built PCs themselves before, they’ll reach a point in their life where having a company with great technical support people and a warranty will mean more than the savings of a DIY build. Some of the best comments we ever get are when former DIY’rs who’ve purchased new systems from us tell us that we put more care into things like wiring and testing than they ever did themselves. It takes a lot to admit that, and it means a lot to us.

Let's talk about the future of hardware in desktop and notebook PCs. Where do you see hardware such as graphics cards, hard drives, displays and memory going in the next couple of years?

There’s a lot to that question so let me see if I can give you the expurgated version.

Displays: 4K displays are coming… I just wish they’d hurry up already! 4K will revolutionize what PC gaming looks like, and the power needed to run it well.

Memory: hopefully, more speed with less voltage needed. I’ve heard that’s what DDR4 could do, but I don’t know if anyone’s seen it at full speed yet.

We see a lot of reports about the "death of the PC" due to the smartphone and tablet industry. Why do you think the hardcore PC hardware market is still going to be around even with the rise of both of these products?

Has anyone seriously said “I don’t need a PC, I have a phone.” I don’t see that device as any challenge to the PC market at all. And can you imagine playing Diablo 3 on a tablet with your finger? My household is lousy with phones and tablets, but the PCs get much more use. When I want to check email at a restaurant, I use my phone. When I want to play Angry Birds, I use my tablet. For anything more complex, I need a PC. All great devices, but they each serve very different usage models.

We have also seen the beginnings of the cloud-based PC game service. Do you think that if this becomes popular it could mean that there will be less of a need for high end PCs for playing games?

I assume you mean rendered in the cloud and delivered as video services? I doubt it, just because of the lag issues. And those cloud systems then need to become the gaming-capable PCs, just at the other end. It doesn’t change the need for the gaming-capable system, it just relocates it.

Windows 8 is, without a doubt, the biggest change for Microsoft's operating system since it began. What is your personal opinion on Windows 8 and how it will affect the PC industry?

I’ve barely messed around with the betas myself, so I can’t really weigh in yet. But a new OS is always monumental for the PC industry. The OS itself is actually not as big a disruptor at first as the ecosystem of drivers from all the various hardware manufacturers that need to plug into it. From that driver experience I can definitely say that it can really sour people on a new OS (like the very rocky early Vista support), to just getting out of the way and letting the OS perform like it’s supposed to (like with the great Windows 7 launch).

Does Falcon Northwest have any plans to release any gaming PC products that will use Windows 8's touch screen interface, such as a notebook or tablet-slate device?

Tablets are definitely not in our wheelhouse. Touch on the desktop is probably not going to be that useful in most scenarios. But touch-enabled notebooks are probably more promising. We have yet to see what type of price premium those touch displays will add.

How do you feel about Microsoft entering the PC hardware market with the Surface?

As with any tablet, it’s just not a competing product at all. So I’m happy to see anyone take on Apple.

Finally, is there anything else you wish to say about Falcon Northwest and its plans for the future?

I just wanted to thank all of our customers and supporters for 20 great years, and hope you’ll stick with us for the next 20!