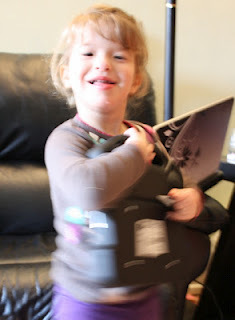 Meet Maya Nieder, who relies on the app which has been removed

Speak for Yourself is, or was, an extended device for Apple's iPad. The application became notable online for its significance in the lives of one family, the Nieders. The Nieder family's daughter Maya was born with a disability rendering her unable to speak normally. For the family, the Speak for Yourself hardware proved to be a godsend, letting them hear their daughter for the first time in their lives.

Now, the Speak for Yourself tools shall never be updated again. Why? Patents. In this day and age everything seems to come down to how many patents you have and whether you can use them to metaphorically curb-stomp other companies without being punished for it yourself. A large, highly profitable company sued the start-up business behind Speak for Yourself in March, and this is a common occurrence in the world of business.

Speak for Yourself was the lifeline for Maya Nieder and her family's hope for talking to their daughter. The only word four-year-old Maya is able to say is 'done'. While this word can be immensely useful in conversation it is of limited use when it is the only word you can use. Maya was two and a half when the family purchased an iPad and stumbled upon Speak for Yourself. They say the application's simplicity was invaluable, and it was robust enough to even serve her into adulthood.

Even Maya enjoyed the application, and no doubt, so too did her family, who could actually see their child learning to talk, even if only through a digital interface. The company responsible for the application was then taken into the typical legal battles that you hear so frequently about by two major companies in the market; Semantic Compaction Systems and Prentke Romich Company.

The two companies argue that the app infringes on their patents and neither company would benefit from letting it remain on the market. Prentke Romich can make up to $9,000 on a single communication device, whereas they could make a few hundred from a mere iPad app; the hardware profits clearly do come above software.

The Nieder family met representatives from Prentke Romich Company and Dynavox in order to explore and sample potential devices on the market, since there was the feeling that an iPad app might not be sufficient for the future. None of these devices worked for Maya and it would take several years before Prentke Romich's device would even be suitable. After much research, the family learned that there were no plans for an iPad app coming in the future.

The cruel irony comes in the form of Prentke Romich's tagline: "We Believe Everyone Deserves a Voice". Except you, obviously. You should have bought a device from us instead. This information all comes from a blog post in March though there has since been an update to the situation.

Can you guess what happened on Monday, June 4th? Speak for Yourself disappeared from the App Store, despite the companies holding the lawsuit receiving monetary damages. Once you've gotten damages, how can you go a little further? Simple: you contact Apple and inform them the app infringes on patents. As is so typical of faceless companies, the need for profit came first and therefore competition had to be quashed.

The Nieder family also feel concerned about a much more sinister threat: could an application be remotely pulled from an iPad? As it is the app is installed on Maya's iPad and downloaded to their iTunes account, but anything even as minor as an iOS update could render the app worthless. It was built to take advantage of the current operating system and if problems arise the team cannot do much about it. They cannot distribute code or bug fixes for compatibility, leaving Maya without a voice again.

It would be intriguing to see Apple remotely pulling applications like this, for it could cause outcry from sectors of the internet. If it was to happen, the company could be accused of adopting an excessively totalitarian control. Of course, this view does not reflect reality due to the fact that Apple have no prior history of having pulled applications remotely from devices. If they were to do so it would mark a first for the company, excluding when they delete applications containing malicious code or blatant copies of existing apps on the App Store. If this is not the case - and it looks overwhelmingly likely it isn't going to be - then the app should be downloadable still using the family's iTunes account and its purchase history, which should continue to list the application even if it is no longer available to buy.

The reality is harsh, and it could leave Maya without a voice in the future. What if the app isn't compatible with a newer iOS build? Don't update the iPad obviously, but how do you know if it is compatible or not?

Images: All images are from the family's blog.