You might be thinking that with its recent focus on augmented reality and holograms, Microsoft wouldn’t have much interest in VR. But you’d be very wrong as the company’s research arm showed today when it unveiled the Irides project.

According to Microsoft, the fundamental challenge of virtual reality head-mounted displays (HMDs), like the Oculus Rift, or Sony’s Morpheus, is offering high quality, responsiveness and mobility, all at the same time. And so far, they all fail at this – or at least that’s the company’s argument. 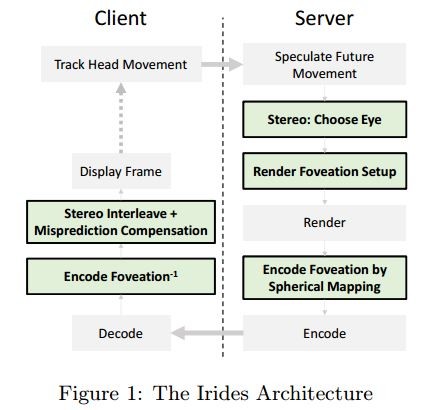 Enter Project Irides, which is designed to test some of Microsoft’s technologies and see whether VR HMDs could be significantly improved. Irides uses the Kahawai technology, which we’ve detailed a couple of days ago. In a nutshell, Kahawai offloads some of the GPU rendering to the cloud and then streams it back to the headset with higher quality graphics.

But Irides goes beyond that. By leveraging, or rather pushing Kahawai’s technology to its limits, it takes advantage of super low-latency and low-bandwidth, as well as predictive graphical processing to offer a superior mobile experience on virtual reality headsets.

Irides also does this with a technique called “likelyhood-based foveation” that renders higher quality parts of an image and ‘gracefully degrades’ others, all based on where the user is likely to look. It also uses a spherical mesh for said image. In a sense, this sort of mimics the human eye, and offers the user lower latency and higher quality at the same time.

Irides was tested out with the help of Doom 3 and its speedy gameplay. According to the company, participants came away impressed and mentioned a noticeable difference both in quality, latency and overall experience when these techniques were used to render the game in VR.

Now, with all of that being said, it’s worth remembering this is a research project. It might see the light of day or it might not and it either case it won’t happen to soon. Plus, Microsoft is much more likely to roll-out this technology in some future version of the HoloLens instead of creating a new VR headset.

Thanks to H0x0d for the original tip!