When the Twitter app for Windows 8 and Windows RT was released last week, rumors quickly began swirling that Microsoft had either developed the app itself or gave Twitter’s programmers hands-on lessons and significant help creating it.

Regardless of how it was developed, users enjoy it – the app currently has a rating of four out of five stars based on 1,046 reviews. By comparison, MetroTwit, an app that’s been out months before Windows 8 was even officially released, is rated about one star lower based on 1,561 reviews.

It’s easy to see why users are flocking to the app, as there are few other big-name social networking apps in Microsoft’s digital stores for its operating systems. There aren’t official apps for any other major social network, in fact – no official app for Facebook, Instagram, Google+, tumblr, Pinterest or Path on either the Windows Store or Windows Phone Store. The lack of a Google+ app makes sense, given Google’s hard-line stance on supporting Microsoft platforms, but there’s little excuse for not having the others. 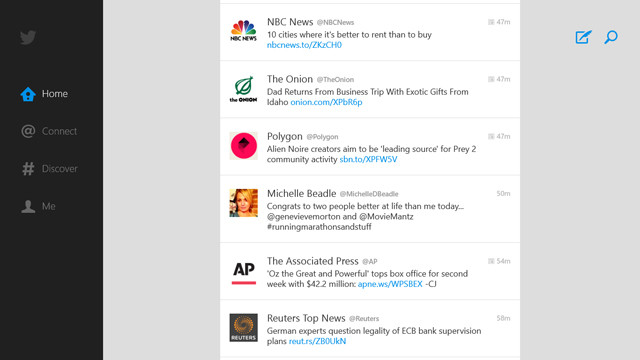 Twitter is the only major social network to make official apps for Windows 8, Windows RT and Windows Phone.

Facebook in particular not developing a Windows app has to be an embarrassment for Microsoft, as the Steve Ballmer-led company has been Facebook’s biggest corporate partner over the years – even as far back as when it was dwarfed by MySpace in terms of market share. In 2007, Microsoft bought a 1.6 percent stake in Mark Zuckerberg’s company for $240 million, and since then the two sides have worked closely together on search integration. Similarly, the lack of an Instagram app on Windows Phone is equally as troubling, as Instagram has been owned by Facebook for nearly a year.

Similarly, the People hubs for Windows platforms lack many of the features people come to expect when using Facebook. Users can’t like responses, for instance, and filtering what friends appear in the hubs is currently impossible. The People hubs are simply watered down versions of Facebook, which isn’t likely to serve as a substitute for an app from Facebook itself.

On an earnings call earlier this year, Facebook CEO Mark Zuckerberg was adamant that Facebook is going to concentrate on mobile devices.

“The big thing for us is that we have a billion people using our products, and we need to make Facebook really good across all of the devices they use,” he said, “and we’re going to keep on pushing to get more integrated with the system.”

It’s shocking that information about Microsoft and Facebook working together on Windows apps hasn’t leaked given Zuckerberg’s stance on mobile platforms, which brings up the question of if Facebook and Microsoft have even been talking about the possibility.

It shouldn’t be up to Microsoft’s programmers to make apps for major developers. No matter how well they know Windows operating systems, they don’t have access to the third-party developers’ road maps and other vital information. In some cases, such as Instagram, Microsoft lacks access to essential APIs. In fact, it’s puzzling that Microsoft hasn’t been working with leading app developers since before Windows 8, Windows RT and Windows Phone 8 launched.

If there’s been one issue cited as a concern in all three operating systems, it’s been the lack of quality apps available. Sure, the Windows Store is closing in on 50,000 apps, but many of those simply aren’t good – and there’s a serious lack of well-known apps as well.

When Facebook updates its News Feed soon, Windows Phone users will likely be left in the dark.

Launching a new operating system is difficult, and Microsoft launched three last year. While those were personnel- and resource-intensive tasks, it’s unlikely Microsoft was incapable of providing hands-on training for major developers before the Windows product launches. Yes, there are some major apps – such as Netflix, Hulu, ESPN and iHeartRadio – already available, but those apps don’t drive user interaction and interest as much as social networking apps do, and they’re not enough to compete with Apple and Google yet.

Microsoft’s made a habit recently of paying developers to bring their apps over to Windows platforms, but that’s likely not as big an incentive for a company such as Facebook as it is for startups. Providing free courses on programming for Windows platforms, however, would be. Improving the skills of employees is a bigger long-term benefit for multi-billion dollar companies than a quick cash influx of less than a million dollars.

While Microsoft faces an uphill battle in terms of mobile market share, Windows platforms also have the disadvantage of using a unique user interface. Companies have to design apps from the ground up for Windows 8, Windows RT or Windows Phone. By comparison, many leading Android apps are merely tweaked from their iOS counterparts.

Regardless of how the Twitter app was made, Microsoft needs to start providing top-tier companies with hands-on training developing Metro apps. The end result of quality, big-name apps will be worth it, and devices across the spectrum of form factors will benefit.