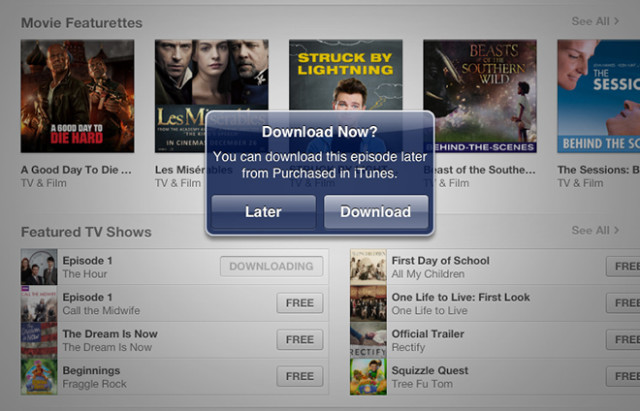 Apple have added a feature to the iTunes Store whereby users can now choose to download content 'later' by simply storing the purchase through iTunes in the Cloud. Movies, TV episodes, Season Passes and completed seasons can now be downloaded immediately or at any point in the future. The new option additionally applies to music content that Apple deems would take longer to download than an album or single track. The feature will prove especially useful for those making purchases via a cellular data connection who aren't in favour of having their data capped.

As in the above image, when a large purchase is made, a pop-up window will allow you to choose between "Later" and "Download". Select "Later" and the content is moved to the Purchased section of the store for download at any time.

The Apple documentation on support.apple.com notes the change, giving scenarios in which the feature applies to various types of content:

Tapping the Later button will not download any episodes. You'll be able to download your episodes at any time from iTunes in the Cloud.

The new option is available for users in countries where Apple offers support for iTunes in the Cloud.