Google is expected to announce two new Nexus devices as well as Android 6.0 Marshmallow at its September 29 event. While there are virtually no surprises left, due to the sheer quantity of information leaked over the past few months, it appears that a few newly leaked slides have confirmed the last remaining details about the upcoming Huawei-made Nexus 6P phablet.

According to these slides, the Nexus 6P will host a massive 3,450 mAh battery, which offersa slight improvement over competing flagship devices like the Samsung Galaxy Note 5, the iPhone 6S Plus and last year's Motorola-made Nexus 6. 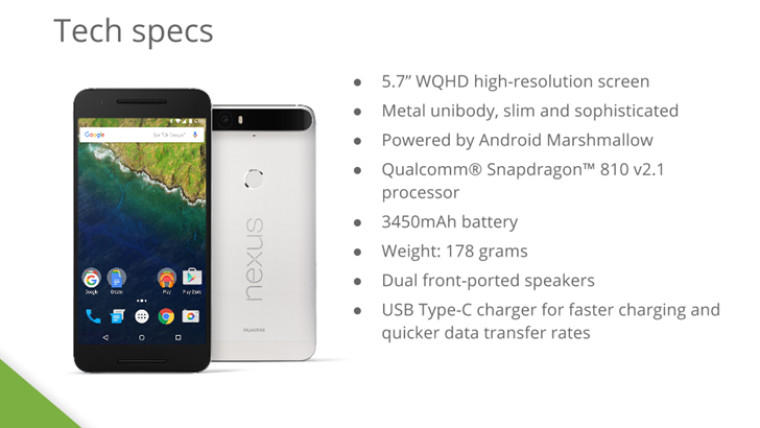 The slide also alleges that the device will be powered by Android 6.0 Marshmallow which reportedly also has a "Doze" feature that is said to double the battery life on standby. However, the incomplete spec sheet also claims that the 6P won't include the Snapdragon 820 processor as previously reported , but will instead offerQualcomm's Snapdragon 810 v2.1 instead.

The upcoming device will also have a metal unibody design giving it a "slim and sophisticated" feel and will have a5.7-inch WQHD Gorilla Glass 4 protected display . The Nexus 6P will weigh in at 178 grams and will also include dual front-facing speakers. The 6P will also utilize a USB Type-C port and support quick charging.. The flagship device will reportedly be available in black, white, silver/aluminum and gold colors and will also be available with a storage size of up to 128 GB.

Along with the Nexus 6P, Google is also expected to unveil the Nexus 5X, which is a slightly smaller device that will be produced by LG. The purported specs of this device include:

While much about the new Nexus phones have already been revealed, the question of pricing and availability remains unanswered. Naturally, these details should be revealed at Google's launch event on September 29. Meanwhile, you can view the rest of the leaked slides below.