Back in June 2016 - after launching its HoloLens headset - Microsoft announced that Windows Holographic devices are "months away...not years". The Redmond giant opened the platform for all devices, allowing other companies to build headsets utilizing the technology as well. In fact, Microsoft even announced that it would be partnering with different firms to manufacture low-cost headsets, that could be purchased for as little as $299.

It appears that the company has succeeded in its efforts, as Lenovo has now showcased a VR headset utilizing Windows Holographic at CES 2017. 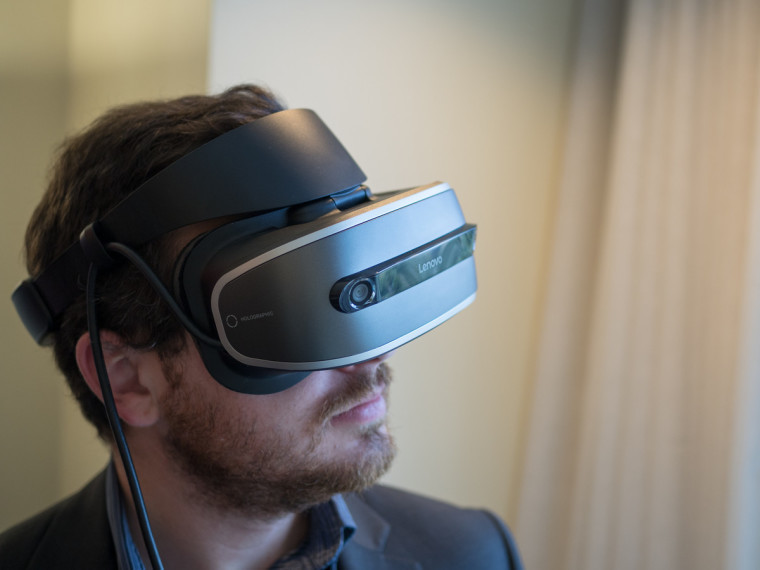 Lenovo says that its headset weighs around 350 grams, which is considerably less than the HTC Vive and Oculus Rift, which weigh approximately 550 grams and 450 grams respectively. It packs two 1440x1440 OLED displays that can be swung up using a hinge, should the user want to take a quick breather.

Apart from this, the headset also sports two cameras in front, that will likely be used to scale the room and provide depth tracking - similar to what we've already seen in the company's Phab 2 Pro Project Tango handset.

Not much else is known about the device, but Lenovo has announced that the headset will make its debut "later this year" and will be priced at "less than $400". That said it is important to note that Microsoft has already cautioned that Windows Holographic VR headsets will offer different experiences based on price and specifications. If you're interested in knowing if your PC can fully utilize the capabilities of the platform, check out the minimum PC requirements here. The Windows Holographic shell itself is slated for a release on "mainstream PCs" in early 2017.