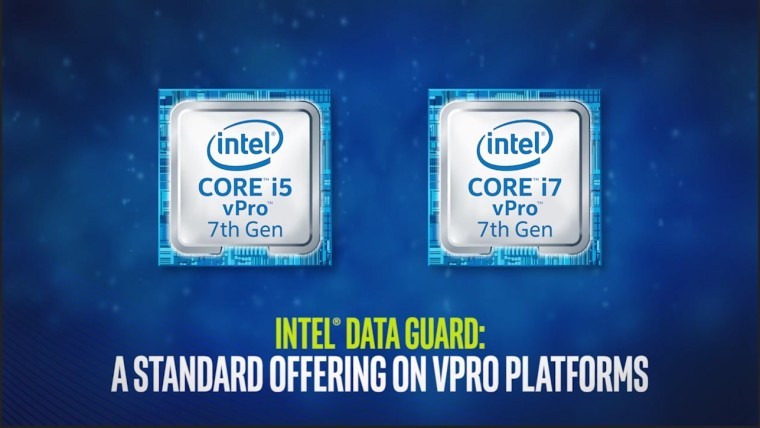 Last year, Intel announced its seventh-generation Kaby Lake Core m3, i3, i5, and i7 processors, focusing upon improvements to power draw as well as performance. Now, it's time for business customers to receive some seventh-gen attention in the form of brand new vPro CPUs unveiled at CES 2017.

While touting a 12% improvement in performance over last generation CPUs and "50% increased productivity over a 5-year-old PC", Intel has also been talking up the security capabilities of its new vPro processors, including Intel Authenticate and Intel Data Guard.

Having come out of preview, Intel Authenticate provides a means for businesses to implement configure, and manage multi-factor authentication across their vPro fleet. While the function can operate independently, Intel Authenticate can integrate with Intercede's MyID solution and, in the future, with Windows Hello, introduced as part of Windows 10, as a co-development strategy with Microsoft.

The company also announced the future introduction of Intel Data Guard which offers a hardware-based file and folder encryption system, from the point of creation and throughout the data lifecycle. Importantly, the encryption remains transparent to users while providing IT organizations the ability to apply policies according to their security requirements. While currently in customer trials, the technology will be released later this year and will be supported on Windows 7, 8.1, and 10.

Furthermore, both Intel Authenticate and Data Guard are available on hardware containing either a sixth and seventh-generation vPro CPU, which will allow business to leverage these solutions in combination with recent hardware.