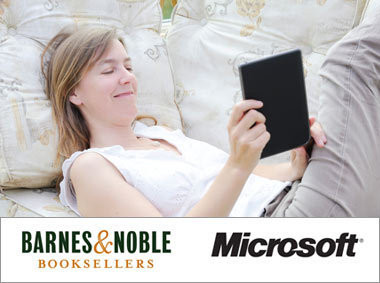 In October, Microsoft and Barnes and Noble stated that their previously announced partnership that would be the home to the Nook tablet and eReader business would be called Nook Media. Today, Barnes and Noble announced that Nook Media has a new investor that will slightly reduce Microsoft's stake in the company.

Today's press release reveals that UK-based learning company Pearson will put in $89.5 million in cash to obtain a five percent stake in Nook Media, with the option to buy an additional five percent of the company's stock; Barnes and Noble now controls 78.2 percent of Nook Media.

Microsoft put in $300 million earlier this year for its stake in Nook Media, which at the time was worth about 17.6 percent of the subsidiary. With today's move by Pearson, Microsoft's share of Nook Media has been cut down to 16.8 percent.

At the moment, Nook Media, which also includes the bookseller's college book division, is still a subsidiary of Barnes and Noble, although it's possible that it could be spun off into a separate company in the future; Barnes and Noble launched the Windows 8 Nook eReader and store app in November.